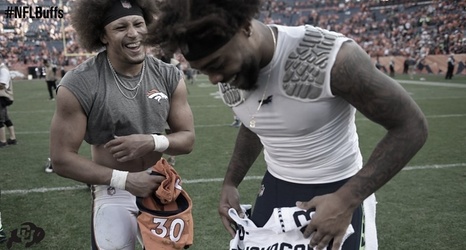 Nine former Colorado Buffaloes took the field in week 1 of the NFL over the weekend. Phillip Lindsay, Chidobe Awuzie and David Bakhtiari headline this week's action.

Weekly Spotlight
Phillip Lindsay – Broncos Running Back #30
Lindsay impressed in his NFL debut, as the school's all-time leader in all-purpose yards totaled over 100 in week 1. He scored the Broncos first touchdown of the season, when he took a screen pass from QB Case Keenum 29 yards for a score. In doing so, Lindsay became the first Bronco in a decade (Eddie Royal vs.