Cody and Balzert Named CU Athletes of the Week, Presented by Arrow 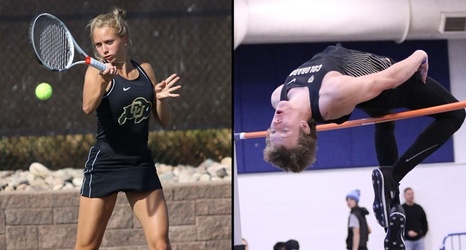 BOULDER – Track's Jeremy Cody, Tennis' Antonia Balzert were named the CU Athletes of the Week, presented by Arrow, for the week of Jan. 13 – 19.

Cody, a sophomore from Pueblo, Colo., became just the 8th CU student-athlete to high jump over a 7-foot bar this weekend when he won the Air Force Invitational. It took Cody just one attempt to break the 7-foot barrier at 2.14 meters.

Balzert, a freshman from Dusseldorf, Germany, won all four matches she competed in as the tennis team went 2-0 against Southern Utah and Fresno State.