Buffaloes blown out at home but new faces show promise 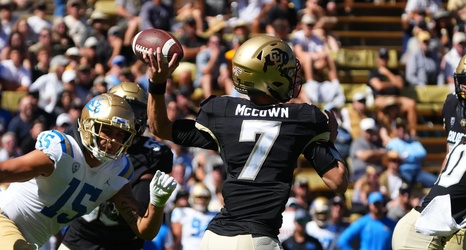 Karl Dorrell and the Colorado Buffaloes coaching staff tried to shake things up when they welcomed the UCLA Bruins to Folsom Field with a number of new faces getting starting roles, including true freshman quarterback Owen McCown, but the results were mostly the same as the Buffs fell to the Bruins 45-17.

While the score looks bad, and it was, McCown showed moxie and the offense seemed more competent than it had all season. It was a lot to ask to put a kid just months from high school into that position and he handled himself well. At running back, freshmen Charlie Offerdahl and Anthony Hankerson acquitted themselves nicely and Jordan Tyson had a few good grabs.