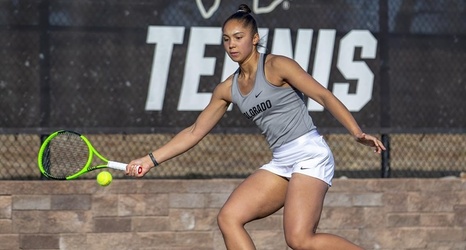 BOULDER – The University of Colorado women's tennis team suffered its first loss of the season Saturday afternoon in a rare and frigid January outdoor match against the Air Force Academy, 6-1.

The Falcons were unbothered by the wind and cold from the start, dominating the doubles point with a pair of 6-2 victories in the No.1 and No.2 matches. The team then picked up a 2-0 lead in the No.3 match with Nadeen Lieberman defeating Maria Campos with a pair of 6-2 sets. Air Force clinched the victory after consecutive win in the No.