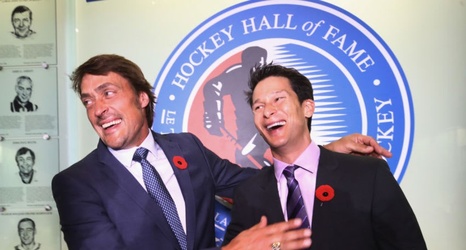 TORONTO, ON - NOVEMBER 10: (l-r) Teemus Selanne and Paul Kariya pose for photos during a media opportunity at the Hockey Hall Of Fame and Museum on November 10, 2017 in Toronto, Canada. (Photo by Bruce Bennett/Getty Images)

In the fourth instalment of an offseason series, Mile High Sticking takes a deep dive into the 25-year history of the Avalanche, and celebrates the most obscure, brief, and forgotten players. In this edition, we remember the time the Avs won free agency with Paul Kariya and Teemu Selanne. Or did they?