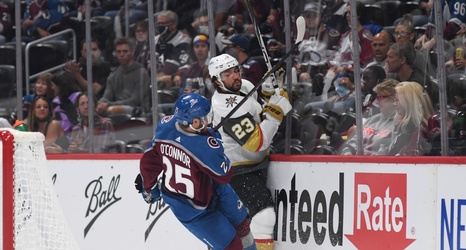 For the first 40 minutes, the Avalanche had re-discovered its “A” game for the first time since Period 1 of Game 2. Coach Jared Bednar’s re-configured forward lines created chances and goals by Brandon Saad (first period) and Joonas Donskoi. Third-line winger Logan O’Connor was throwing his body around and trying to generate a fore-check. The Avs led 2-0 after two and had a 23-14 shots advantage. It … was … the … better team. But then the third period happened. A bad turnover by winger Andre Burakovsky quickly turned into Alex Tuch’s goal at the 1:03 mark and 3:04 later, the Knights tied in Jonathan Marchessault’s goal off an odd-man rush.