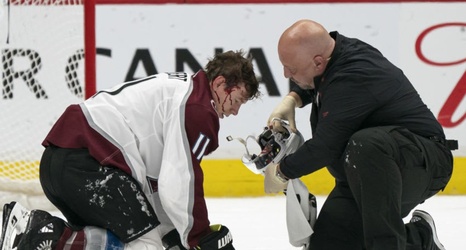 VANCOUVER, BC - NOVEMBER 16: Matt Calvert #11 of the Colorado Avalanche is attended to by a team trainer after getting hit with a shot during NHL action against the Vancouver Canucks at Rogers Arena on November 16, 2019 in Vancouver, Canada. (Photo by Rich Lam/Getty Images)

The Colorado Avalanche have had a bevy of knuckle-chuckers over the years. This is a look at who is on my Mt. Rushmore.

The Colorado Avalanche franchise has had a number of pugilists over its, nearly, five decades of existence. Yes, I’m including the Quebec years in that statement. But, who is the best is a question that could have a million answers.