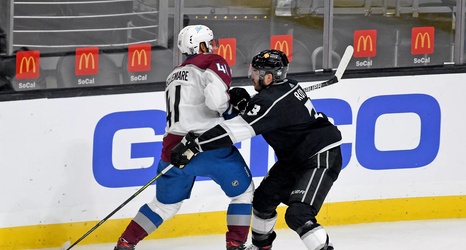 After stringing a couple early season wins together the Colorado Avalanche continued their road trip in Southern California by finishing out their set with a second game against the LA Kings. The lineup looked noticeably different with new acquisition Greg Pateryn and the highly anticipated NHL debut from Bowen Byram on the back end. Hunter Miska received his first NHL start filling in for the ailing Pavel Francouz and allowing Philipp Grubauer some rest as the schedule now picks up. Unfortunately those debuts were spoiled when the Avalanche dropped this game 4-2 with a questionable offensive effort.