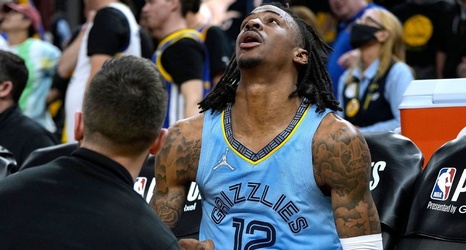 SAN FRANCISCO -- The Memphis Grizzlies are concerned about star point guard Ja Morant, who limped off the court with more than five minutes remaining in a blowout loss to the Golden State Warriors after Jordan Poole grabbed Morant's right knee during a trap near half court.

Morant left without talking to reporters but tweeted "broke the code," with video of Poole grabbing his knee on a fourth-quarter play, before later deleting the tweet. Morant could be seen walking with a limp toward the team bus following Memphis' 142-112 Game 3 loss at the Chase Center on Saturday night.