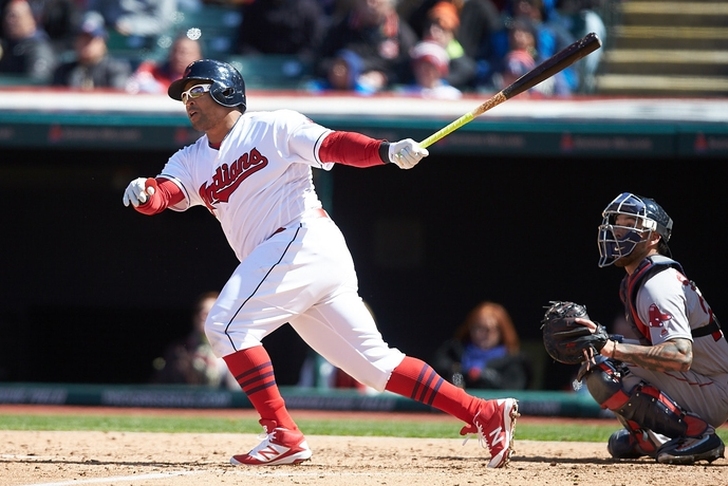 The Cleveland Indians will be without the services of Marlon Byrd for the rest of the regular season. The MLB has suspended Byrd for 162 games after testing positive for PEDs.

The PED that Byrd tested positive for was growth hormone secretagogue Ipamorelin. Byrd said in a statement he was accepting the MLB's punishment, but didn't knowingly take the PED.

"Today, I have accepted a 1 year suspension by Major League Baseball," Byrd said. "Recently, I was notified that I had tested positive for Ipamorelin, a peptide prohibited by the JDA. In 2012, I tested positive for the medication Tamoxifen, which I was using on the advice of a physician for a medical condition resulting from surgery, and I accepted my suspension without challenge. Since that time, I have paid close attention to the substances that are banned by the Joint Drug Agreement, as I had no intention of taking any banned substances. I relied upon a medical professional for assistance and advice with respect to the supplements that I was taking. However, certain supplements I was taking were not on the NSF Certified for Sport list, and therefore, I assumed certain risks in taking them. When I learned that I had tested positive for Ipamorelin, I retained the services of private counsel and an independent chemist to determine the origin of the Ipamorelin test result because I never knowingly ingested Ipamorelin. After an extensive investigation by my lawyers and an independent chemist, it was concluded that the most likely source of Ipamorelin was a tainted supplement. I alone am responsible for what I put in my body, and therefore, I have decided for forgo my right to an appeal in this matter and accept the suspension. I apologize for any harm this has caused the Cleveland Indians, Indians’ fans, my teammates, and most importantly, my family."

This is Byrd's second suspension for PEDs. He tested positive back in 2012 and received a 50-game ban. A journeyman, Byrd had spent time with 10 different MLB teams since getting his start with the Phillies in 2002.

Byrd signed a one-year deal with the Indians this offseason. He was hitting .270 with five homers and 19 RBIs this year. He's actually the second Indians OF to be suspended for PEDs this year. Abraham Almonte was hit with an 80 game suspension in February.