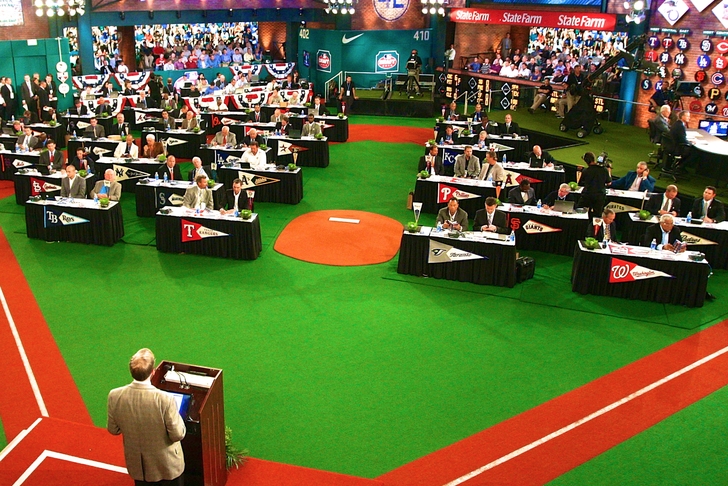 The Cleveland Indians had four draft picks during day one of the MLB Draft - selections no. 21, 31, 38 and 61. Cleveland has areas where they lack in organizational depth along with areas where they are deeper. Fortunately, where the team is lacking is where this year's draft is rich: pitching.

Justin Masterson seems to be all but gone after the 2014 season, leaving Corey Kluber, Trevor Bauer, Zach Mcalllister and Josh Tomlin as their four returning starting pitchers in the rotation. When you look down into the Minor Leagues for pitchers you see the hard-throwing Danny Salazar as the top prospect. Salazar started this season in the MLB but after a shaky start he was demoted to the Triple-A. He is currently on the DL.

Other names include Carlos Carrasco, who got pushed from the starting rotation to the bullpen, Cody Anderson, a pitcher who doesn't have overpowering stuff but has plenty of stamina to go deep into the game, and Dace Kime who looks to be a bullpen or end-of-the-rotation type of guy. Pitching is the biggest need for the Tribe when looking into the future.

I say corner infielder, but it's more of a 1B need. Nick Swisher is under contract until 2016 but has been a disappointment for the Indians. Already 33, Swisher seems to be in the twilight of his career. Jesus Aguilar has seen some Major League at-bats this seen and is a power-hitting 1B who hits from the right side, something the Indians truly need to develop. Swisher and Aguilar can make for a platoon at 1B over the next couple seasons. However, if Aguilar doesn't pan out there needs to be someone else they can call on. Maybe that guy is Joe Wendle but his natural position is 2B.

Lonnie Chisenhall is playing 1B as well as 3B this season along with Carlos Santana playing 1B,3B, and C for the Indians. The position flexibility helps with this need but once Aguliar is permanently up with the Indians the Minor Leagues 1B are pretty slim.

Bradley Zimmer is the second Zimmer selected in the first round of the MLB Draft, as Bradley is the younger brother of 2012 first round pick Kyle Zimmer of the Kansas City Royals. Having the chance to see this kid play in person twice, I can say that he is deceptively quick. At 6' 5", 205 lbs., Zimmer is lanky and will more than likely be asked to bulk up. His Junior season, his last one at San Francisco, Zimmer hit .368 with 7 HR and 31 RBI. Zimmer also had a career high 21 stolen bases and a 19-game hitting streak. He was a participant for the USA Collegiate team during the summer of 2013 where he had a team-best 11 stolen bases. Zimmer also hit for a .300 average, 1 HR and 11 RBI that summer.

Combining Zimmer with Tyler Naquin and Clint Frazier should be exciting to follow. Both David Murphy and Ryan Raburn's contracts have team options for the 2017 season and they could both be released to clear the path for one of the OF prospects.

Sheffield has thrown two no-hitters, and has a few games with 17 strikeouts. He's a bit of a concern, since he already committed to Vanderbilt to play with his brother. Obviously, though, he can forego that commitment and decide to take the professional route.

The lefty high-schooler certainly fills a need as we already established that the Indians slimmest position is pitcher. He has a fastball that runs a lot and can be counted on never throwing a straight pitch. You have to believe that the Indians felt good about Sheffield skipping his time at Vanderbilt to draft him in the first round. It should be known sooner rather than later if he decides to go pro or hit the books.

This was a compensation pick for Ubaldo Jimenez that will be another interesting story line to watch as we go forward. Were the Tribe able to turn a decent pitcher in Jimenez into a future star?

Papi is a power hitting left-hander who hits third in the Cavaliers lineup. He can play all three OF positions as well as 1B, he led the conference with 11 HR and is currently carrying a .297 average going into super regionals this weekend. His power numbers could have been even better had he played at a different stadium. According to many, the University of Virginia is one of the toughest college parks to hit a home run in. Papi racked up plenty of Collegiate Awards last season, including first-team All-ACC and first-team All-America by ABCA and Baseball America.

Much like the other pitcher the Indians selected in this draft, Hockin is also committed to play ball at the college level. He is committed to UCLA and is now faced with the decision of going the professional route or staying in the amateur ranks.

The Indians took two pitchers who have to make life-changing decisions, another OF with speed and potential for power and a bona fide power-hitting OF/1B. Overall, the first day of the draft for the Indians was a good one. I still would have liked to have seen a right-handed bat get drafted by the Tribe, but there are still 38 rounds left. Yes, 38 MORE ROUNDS!

Cleveland Indians Fan? Check out other articles like this one:

A Dominant May for Corey Kluber