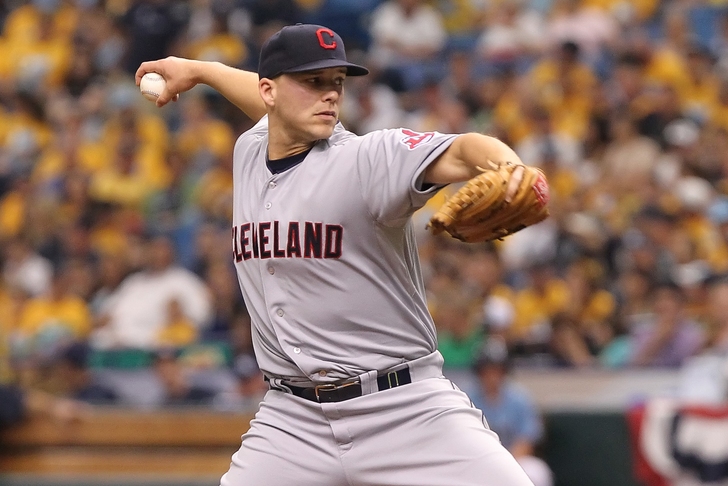 With Justin Masterson returning as the clear ace after he and the Cleveland Indians were able to avoid arbitration this off-season, the Indians are full of questions when looking at the rest of the five potential starters.

Masterson sits atop a rotation that has names like Corey Kluber, Zach McAllister, Danny Salazar, Carlos Carrasco, Trevor Bauer, and Aaron Harang. Those are six guys that are competing for four spots. There are some capable enough names in that list; while there may not be a true No. 2, there are guys who can give you quality innings to  keep their team in the game. Let's take a look at what each of these guys brings to the table.

A) Corey Kluber, RHP: 2013 Stats- W: 11 L: 5 ERA- 3.85 The 27-year-old Kluber appeared in 26 games last season for the Tribe and started in 24. In those starts he averaged just over six-innings of work and did not throw a complete game. Kluber has a fastball that stays around 93-96 mph and is at his best when he is moving his location from corner to corner. His 2-seam fastball has a lot of natural tailing movement and is what he uses to paint the corners. His secondary pitch is his slider that hovers between 89-91 on most days. It still remains a little flat and is a hittable pitch but after a pretty solid 2013 campaign, the fourth-year pro is mostly a lock to open the season as one of the Indians top three pitchers.

B) Zach McAllister, RHP: 2013 Stats- W: 9 L: 9 ERA- 3.75 McAllister is 26 years old and has 46 starts in the Major Leagues in the last two seasons. He has shown himself capable in the minor leagues and lowered his ERA last season. The writing is on the wall for a possible 15+ win season for McAllister, who at times last year seemed to have it all figured out. He throws a fastball that ranges from 92-96 mph, an above-average change-up that goes around 82-85 mph and a breaking ball that is between 80-82 mph. McAllister is more of a pitch-to-contact type pitcher and looks to keep his defense involved. His eighteen decisions of the 24 starts shows that he usually goes deep enough into games to draw a decision, and that's not including his no decisions. McAllister could be the best bet to be the No. 2 pitcher this season.

C) Danny Salazar, RHP: 2013 Stats- W:2 L:3 ERA- 3.12 Salazar is only 24 years old and started ten games last season. He showed off his power arm with an explosive fastball that touches 95-99 mph with ease. Salazar totaled 65 strikeouts in 52 innings with only 15 walks. He pairs his fastball with a change-up that is delivered around 86-89 mph with late tailing movement. The Tribe and I expect the 2014 campaign to be a breakout year for Salazar who is all but a lock to break the starting rotation, and could find his way towards the top by seasons' end.

D) Carlos Carrasco, RHP: 2013 Stats- W: 1 L: 4 ERA- 6.75 Carrasco has potential to be a solid middle to end of the rotation type pitcher. The only thing that keeps him from reaching a higher ceiling is his head. The 27-year-old has been suspended twice for intentionally throwing at a batter, once in 2011 and then again last season. He appeared in 15 games with seven starts. Carrasco is not a strikeout pitcher and has a combined 115 strikeouts in 174.4 innings pitched. Indians Head Coach Terry Francona was quoted saying that he hopes Carrasco "takes-off" this season. However, in my personal opinion, I think Carrasco is best served in a long-relief role, allowing Bauer, Tomlin or Marcum to fill in the No. 5 spot in the rotation.

Trevor Bauer, RHP: 2013 Stats- W: 1 L: 2 ERA 5.29 Bauer is still a top prospect in the Major Leagues but is starting to waiver on the edge of being a disappointment. He has all the potential and very good stuff but has had nothing but problems when it comes to commanding the strike-zone. His inability to get the ball across the plate has caused Bauer to bounce back and forth between the Minor and Major leagues. With a fastball that ranges from 90-96 mph and an above average curveball that sits anywhere between 74-82, he has the stuff to be a top-of-the rotation type pitcher.

F) Aaron Harang, Josh Tomlin, Shaun Marcum: Harang and Tomlin have more of a chance to make the rotation than Marcum, who is recovering from surgery on his throwing arm and is still unable to pitch in a live game. Harang is a new addition to the Indians and will have to really impress to beat out the returning Josh Tomlin. Trevor Bauer is also in this race, as we can almost expect two of those four names to end up being the last two pitchers in the Indians rotation.

Obviously this rotation could change at anytime but to start the season, but if I had to guess, the rotation would be:

5) Aaron Harang (With Carrasco, Bauer, Tomlin all knocking on the door.)