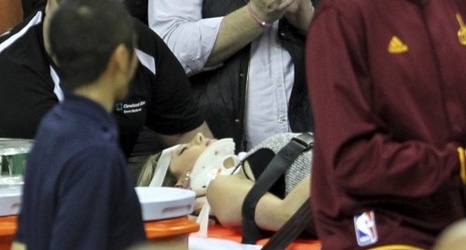 CLEVELAND: The wife of PGA champion Jason Day has been treated and released from a hospital after star LeBron James crashed into her during the Cavaliers’ win over the Oklahoma City Thunder on Thursday night.

Ellie Day was carried from Quicken Loans Arena on a backboard, placed on a stretcher with her head immobilized and taken to MetroHealth Medical Center. She was released early Friday morning, according to hospital spokeswoman Tina Shaerban Arundel.

James was scrambling for a loose ball in the fourth quarter of a 104-100 win over Oklahoma City, when the 6-foot-8, 250-pound All-Star launched himself into the air, plowing into Ellie Day as she sat next to her husband.