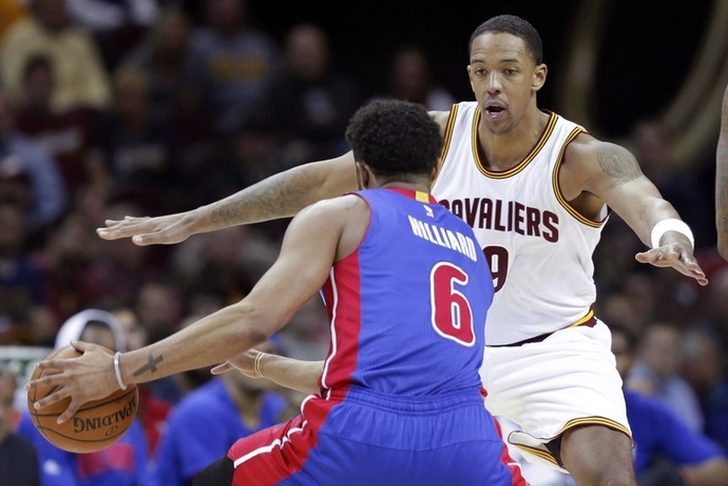 The Detroit Pistons were shellshocked Sunday when New Orleans Pelicans star Anthony Davis dropped 59 points and 20 rebounds on them in a 111-106 Pelicans win. They didn't let it show Monday, holding off the Cleveland Cavs 94-88 in Channing Frye's debut for the Cavs.

Frye didn't practice with the team or participate in a walkthrough before being subbed in during the second quarter, drawing two early fouls and scoring just two points in nine minutes. It was a forgettable debut, but perhaps to be expected considering the circumstances.

On the other side of the ball, it was Pistons guard Reggie Jackson who paced the Pistons with the 23 points along with playing a pivotal role in building an 18-point Detroit lead after three. More Cavs and Pistons news inside the Chat Sports iPhone and Android apps!

The Cavs reeled off a stretch of ten straight points in the fourth to make it a game, but Jackson punched right back by dropping in a floater in the paint, followed by a Kentavious Caldwell-Pope strip and score off of a drive by LeBron James.

Caldwell-Pope finished with 19. Big man Andre Drummond did his part too, boxing out and grabbing 15 rebounds.

Kyrie Irving scored 30 and Kevin Love dropped in 24 for the Cavs, but Cleveland couldn't fully work past an off night by LeBron James. James shot just 5 of 18 from the floor for 12 points -- 13 points off his season average. He also committed six turnovers and went 0 for 4 from distance.

Check out a condensed ten-minute highlight reel of the game below, courtesy of YouTube user NBA Highlights: