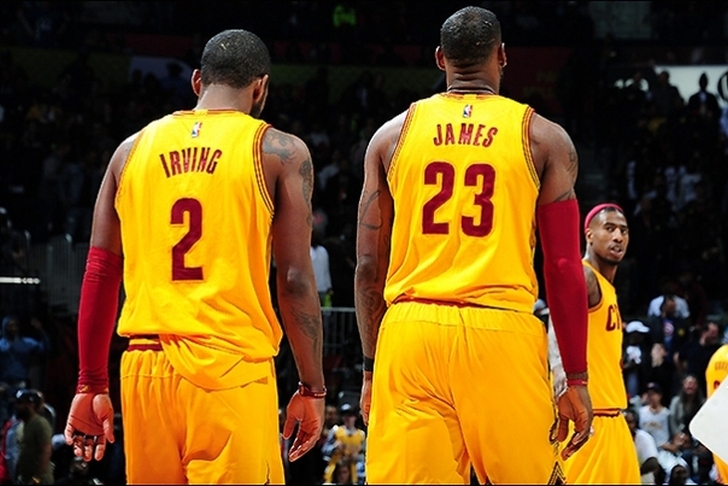 The Cleveland Cavaliers are fresh off a thrilling 135-130 win over the Atlanta Hawks Saturday, as they continue a difficult road swing. The Cavs are 1-1 on the road trip so far, with the Miami Heat coming up Saturday night, making for a tricky back-to-back road game. The Cavs will get a home game after they play the Heat, but they are back on the road again for three straight. Let's get you up to speed with the week that was and the week ahead with our Cavs Weekly update:

Standings:
The Cavs still have a three-game lead over the Boston Celtics. Both teams are 7-3 in their last 10 games. The Wizards and Raptors are both six games back, as the Celtics remain the most dangerous team in terms of fighting for the No. 1 seed in the Eastern Conference.

This Week:
Coming off a tough homes loss to the Bulls (without LeBron James), the Cavs rebounded against the Milwaukee Bucks in a 102-95 win. Kyrie Irving led the way with 25 points, while James returned from his strep throat to drop 24 points and 10 rebounds.

But on the road Wednesday against the Celtics, the Cavs came up short in a 103-99 loss. James was fantastic, putting up a triple-double with 28 points, 13 rebounds and 10 assists. It was the first time all season the Cavs lost a game on the road in which they held a lead during the fourth quarter.

The Cavs were able to avoid losing back-to-back games for the first time since late January by holding in a 135-130 thriller against the Hawks. The Cavs drained 25 3-pointers, setting an NBA regular season record in the process. James had 38 while Irving had 43. James was 6 of 10 from 3-point range.

What's Next?
Cleveland hits the road again to take on the Heat on Saturday, with the Heat then traveling to Cleveland to take on the Cavs Monday. Then it's back on the road for the Cavaliers, visiting the Pistons Thursday. The week ends with a tricky back-to-back, visiting the Magic Saturday and the Rockets Sunday. Read more Cavs news in the Chat Sports iPhone and Android apps.

Injuries:
Guard J.R. Smith is expected to return at some point within the next two weeks. Forward Kevin Love isn't expected back until the playoffs or early April following a minor knee surgery.

Follow our Cleveland Cavaliers team page for all the latest Cavs news, or download the Chat Sports App!