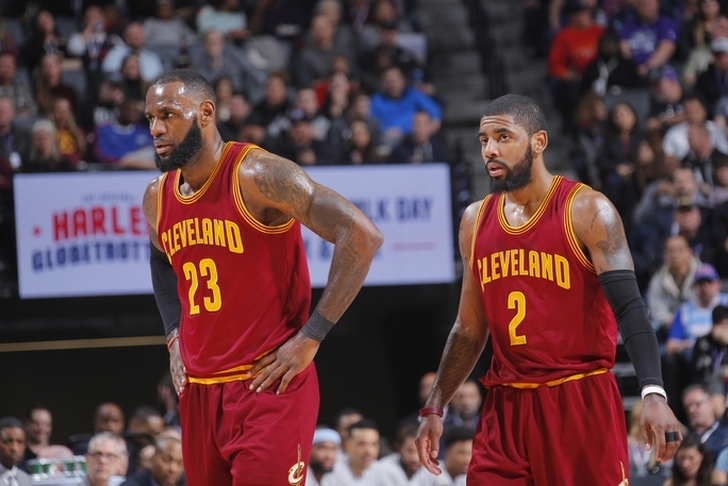 The main reason behind Kyrie Irving's trade request is him wanting to be "the guy" on a team, but he also found out that LeBron James had given the Cleveland Cavaliers his consent to trade Kyrie - twice.

However, FS1's Chris Broussard reports that isn't the case. According to him, Cleveland had two separate deals in place that ultimately would've landed them both Eric Bledsoe and Paul George for Irving, but Cavs owner Dan Gilbert wouldn't follow through on the deal unless LeBron gave a long-term commitment to the franchise.

James didn't do that, which is why the trade ultimately didn't happen - but Irving took the whole thing as a sign that LeBron wanted to get him out of Cleveland.

“Dan Gilbert goes to LeBron and goes, ‘Look, we’ve got this deal on the table. I’ll do it if you commit long-term to stay in Cleveland.' But [LeBron] would not commit, so Dan Gilbert would not do the deal.

“Now, Kyrie Irving finds out about the deal, and he rightly assumed that there’s no way the Cavaliers are doing this unless LeBron gives consent. That’s why he got mad with LeBron. He thought LeBron was in on it. LeBron’s take was more, Look, I’m not trying to trade Kyrie Irving. He’s great. But that’s a heck of a deal—Eric Bledsoe and Paul George. So if you do it, hey, that’s a great deal. But Kyrie took it as LeBron wanted him out of there.”

However, Irving also discovered that LeBron wanted the front office to trade him to the Los Angeles Clippers for Chris Paul after the Cavs won the title in 2016, further complicating the relationship between the two stars.

Kyrie and LeBron reportedly met in Miami earlier this week to hash things out between the two of them, so there's a chance they may have resolved their differences. Both players have been quiet about this matter since it become public.

Irving told the Cavs that he would prefer to be traded to the Miami Heat, Minnesota Timberwolves, New York Knicks or San Antonio Spurs, but with three years and $60 million remaining on his contract (he can opt out after the 2018-19 season) and no no-trade clause, Cleveland isn't necessarily in a rush to trade him - and they don't have to abide by that list.

After not getting the initial feeding frenzy they initially hoped for, Cleveland is willing to let this situation drag out until they get a trade offer they like. The Cavs have set an asking price of a proven veteran, a promising young star and a first-round pick - and won't trade Irving unless those demands are met.