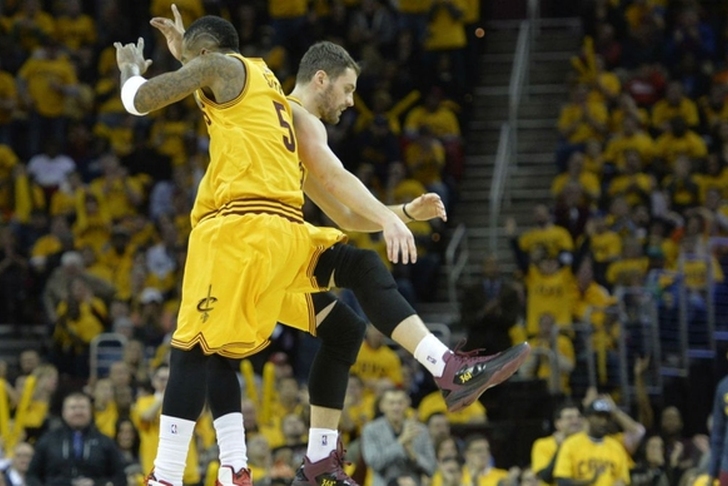 The Cleveland Cavaliers are 37-16 on the season and have a two-game lead for first place in the Eastern Conference going into the All-Star break, but there is still plenty of news and rumors circulating around this team. Here is all the latest buzz you need to know:

Kevin Love out six weeks
Forward Kevin Love will be out for six weeks after having surgery to remove a "loose body" from his left knee, the team announced.

Cavaliers forward and 2017 NBA All-Star Kevin Love underwent arthroscopic surgery to remove a loose body from his left knee this morning at the Hospital for Special Surgery in New York City. The procedure was performed by Dr. David Altchek with Dr. James Rosneck of the Cleveland Clinic present. Love will now undergo a period of rest and rehabilitation and his return to play is estimated at approximately six weeks. His status will be updated as appropriate.

Love is expected to return for the final two weeks of the regular season, giving him time to work back to full strength before the start of the playoffs. He is averaging 20.0 points and 11.1 rebounds per game this season.

JR Smith to return in as soon as three weeks
Smith as been out since suffering a thumb fracture in December, but he may be able to return to the court in three weeks, according to ESPN's Dave McMenamin and Chris Haynes.

Cleveland Cavaliers guard J.R. Smith, who is on target for a mid-March return, could take the court in as soon as three weeks in his comeback from a right thumb fracture, league sources told ESPN.

The sharpshooter is progressing well in his recovery from the injury that he sustained in late December, sources said. Barring an unforeseen setback, Smith will be back on the floor next month.

At the time of his injury, it was not anticipated that Smith would return to the lineup before late March or early April.

A team source told ESPN that Smith will have his right thumb reimaged during the All-Star break, and that could adjust his timeline. Asked to characterize Smith's rehab process so far, the source said, "great."

Smith signed a four-year, $57 million extension with the Cavs this offseason. He is averaging 8.6 points per game on 33.7 percent shooting this year.