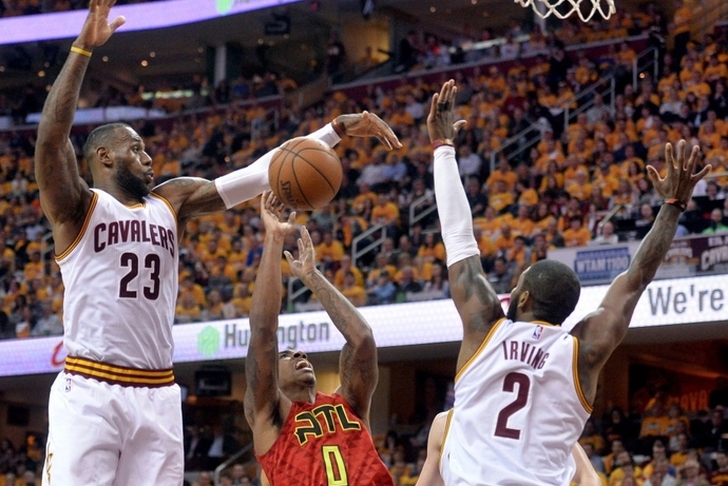 The Cleveland Cavaliers sent a major message to the rest of the NBA with their historic 123-98 win over the Atlanta Hawks in Game 2 and huge comeback victory in Game 3, signaling they won't just lay down to whatever team comes out of the West. However, we're taking it one step further - with that win, the Cavs cemented themselves as the favorite to win the title over the Warriors and Spurs. Here's why:

3) They're healthy!
Say what you will about Golden State's ability to play at a high level without Stephen Curry, but there's no denying that they need him playing at a high level if they're going to win their second straight championship. He's expected to return from a strained MCL this weekend, but there's no guarantee that he'll be able to quickly get back into rhythm.

Cleveland, on the other hand, hasn't been as unlucky. Everyone is relatively healthy, and as a result, the Cavs are clicking and flowing at the right time.

2) Depth
The biggest reason the Warriors were able to beat the Cavs in the Finals last year was because of the production they got from their bench. Now, Cleveland actually has the deeper team. Their star combination of LeBron James, Kyrie Irving and Kevin Love can at least match anything Curry, Klay Thompson and Draymond Green throw at them, while J.R. Smith, Matthew Dellavedova, Channing Frye and Richard Jefferson combine to give Cleveland one of the best bench units in the league.

This Cleveland team has been criticized for not having a true identity, but that's not because they don't do anything well - it's because they do so much well. If you want to play big and slow the pace, they'll throw Timofey Mozgov, Tristan Thompson and Kevin Love at you in the post. If you want to play like the Spurs, that's what the Cavs do best.

In Game 2, Cleveland showed they could beat the Warriors at their own game, playing fast and shooting threes. You can't stop a team that is this versatile, which will ultimately bring that long-awaited championship to Cleveland.