Where are your former Browns now? WR Derrick Alexander 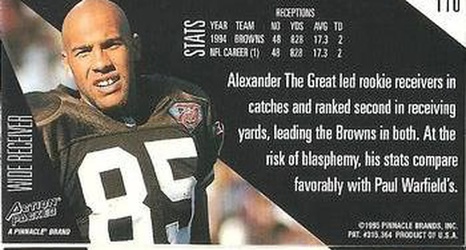 The Browns had a very good team in 1994. That year Cleveland went 11-5-0 and won a playoff game against the New England Patriots. It was Bill Belichick’s Browns against him mentor Bill Parcells, then head coach of the Patriots.

In the pro football issue of Sports Illustrated the following summer, they predicted the Browns would meet the Dallas Cowboys in the Super Bowl. And if they actually had, it would have been their last game as a franchise from Cleveland.

Early in that 1995 season, there were rumors that Cleveland was leaving town. Browns’ owner Art Modell had waited for the City of Cleveland to build him a new stadium.