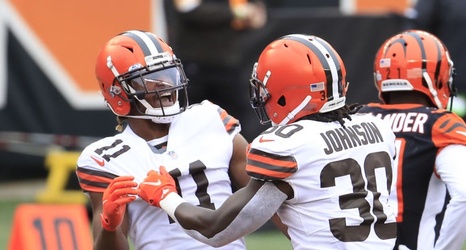 CINCINNATI, OHIO - OCTOBER 25: Donovan Peoples-Jones #11 of the Cleveland Browns is congratulated by D'Ernest Johnson #30 after scoring the go-ahead touchdown reception with 11 seconds remaining in the fourth quarter against the Cincinnati Bengals at Paul Brown Stadium on October 25, 2020 in Cincinnati, Ohio. (Photo by Andy Lyons/Getty Images)

WRs have been getting more play for Cleveland Browns

The Cleveland Browns have getting better use out of their depth at wide receiver than in previous weeks, topped by three grabs by the number five wide receiver Donovan Peoples-Jones. Of course, the last catch of the day snuffed the life out of the courageous but outgunned Cincinnati Bengals.