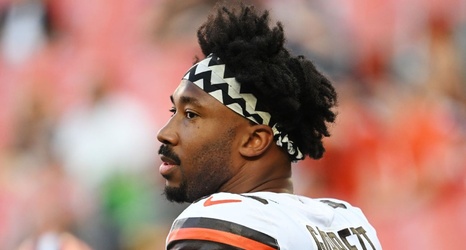 BEREA, Ohio -- Myles Garrett said that he's "definitely grateful" to be alive after his single-car crash Monday and that he's "recovering pretty quickly" from the left shoulder and right biceps injuries he suffered in the accident.

"Definitely grateful to be here," the star Cleveland Browns pass-rusher said Friday. "With what I saw right after ... the pictures.

"It was a helluva event."

Garrett hasn't practiced since the crash, but he was listed as questionable for Cleveland's game Sunday at the Atlanta Falcons.

Browns coach Kevin Stefanski said after Friday's practice that the team will see how Garrett responds to treatment over the next two days before deciding on whether he'll play.