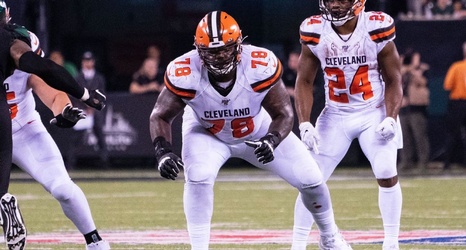 BEREA, Ohio -- Cleveland Browns left tackle Greg Robinson is in concussion protocol and sat out the team's practice Wednesday heading into a rematch with the Pittsburgh Steelers.

He reported to the Browns' facility Wednesday with concussion symptoms.

Robinson had actually volunteered during the team's off day Tuesday at the Greater Cleveland Food Bank.

If Robinson is not cleared to play in Pittsburgh, the team would likely start Justin McCray at left tackle.

McCray started in place of Robinson on Oct. 27 at New England when Robinson was benched for a game.