Browns Mack Wilson not fined for tackle on Patrick Mahomes 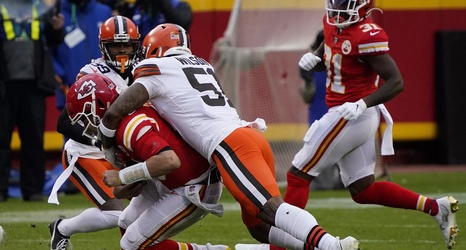 Cleveland Browns linebacker Mack Wilson will not be fined for his tackle of Kansas City Chiefs quarterback Patrick Mahomes during last weekend’s Divisional Round playoff game at Arrowhead Stadium.

While the tackle knocked Mahomes out of the game with 7:27 remaining in the third quarter, the officials did not flag Wilson and the league office confirmed that decision by not hitting Wilson with a fine.