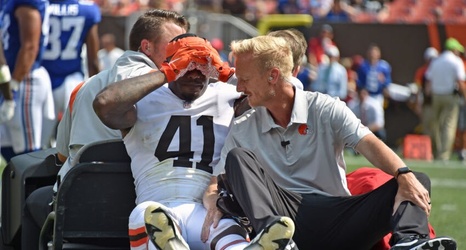 CLEVELAND, OHIO - AUGUST 22: Montrel Meander #41 of the Cleveland Browns leaves the field after an injury during the second half against the New York Giants at FirstEnergy Stadium on August 22, 2021 in Cleveland, Ohio. The Browns defeated the Giants 17-13. (Photo by Jason Miller/Getty Images)

Browns linebacker Montrel Meander ruptured his Achilles tendon in the third quarter of the teams Preseason win over the New York Giants.