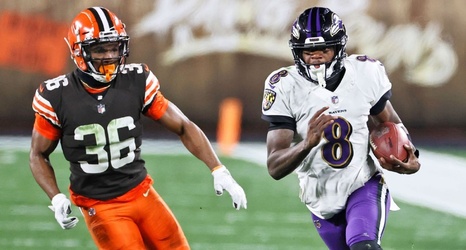 Lamar Jackson left Monday's game at one of the most critical points in the Baltimore Ravens' season.

Jackson ran to the locker room with cramps late in the third quarter, as the Ravens looked to secure a win at Cleveland to bolster their postseason hopes. Baltimore announced Jackson was questionable to return as the Browns made it a one-score game on Baker Mayfield's 21-yard touchdown pass.

With Jackson not on the sideline, Trace McSorley went three-and-out on his first drive. His third-down pass was dropped by Marquise "Hollywood" Brown.