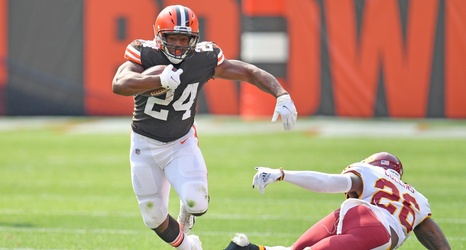 CLEVELAND, OHIO - SEPTEMBER 27: Baker Mayfield #6 of the Cleveland Browns stands with his teammates in unity during the national anthem prior to the game against the Washington Football Team at FirstEnergy Stadium on September 27, 2020 in Cleveland, Ohio. (Photo by Gregory Shamus/Getty Images)

The Cleveland Browns did exactly what they were supposed to do on Sunday. They won a game in which they were favored by a touchdown vs. the Washington Football team. At times it was ugly, and most long-time Browns fans had flashbacks to unimaginable collapses of the past.