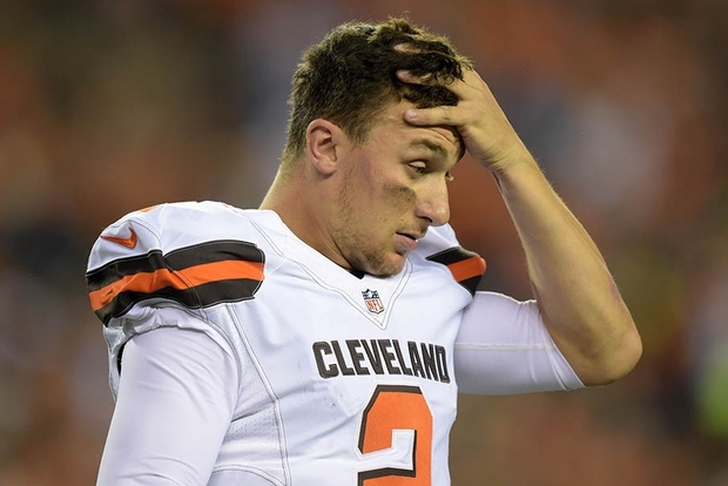 The Cleveland Browns plan to part ways with quarterback Johnny Manziel in March, but the 23-year-old may have bigger problems than that.

Just one day after Manziel was accused by his ex-girlfriend of hitting her "several times" and "threatened to kill them both" - a report he denies and wasn't charged by the police - his father told the Dallas Morning News that the family has tried to get Manziel into rehab two times in the past year and fear for his well being:

"I truly believe if they can't get him help, he won't live to see his 24th birthday," Paul Manziel told The Dallas Morning News.

On Friday, Manziel's agent Erik Burkhardt also voiced concern for Manziel and announced that he is terminating their professional relationship.

The family first tried Saturday afternoon to get Manziel, 23, to agree to go to the Enterhealth Ranch addiction facility in Van Alstyne, but he would not stay. That attempt came the day after Manziel's former girlfriend alleged in a police report that he hit her repeatedly at a Dallas hotel and while driving her home to Fort Worth on Jan. 29. Manziel has not been charged in the incident, but a Fort Worth Police helicopter searched the area for him.

Paul Manziel said that he tried to have his son admitted Tuesday to Carrollton Springs Hospital, but that Johnny was allowed to leave. Paul Manziel said that he is upset that his son was allowed to walk away after Paul told a Denton County Sheriff officer that he believed Johnny to be suicidal. Carrollton Springs is a 45-bed psychiatric and chemical dependency hospital in Carrollton, providing inpatient and outpatient treatment to adults suffering from mental illness and/or addiction, according to its website.

Johnny Manziel spent several weeks in rehab for alcohol abuse this offseason, and left saying he was a changed man. However, Manziel was involved in numerous incidents this season (many involving alcohol), including a previous incident with his ex-girlfriend and wearing a disguise during a trip to Las Vegas the night before Cleveland's regular-season finale.

The Browns traded up to the #22 slot in the 2014 NFL Draft to select Manziel, putting questions about Manziel's work ethic while playing/partying at Texas A&M behind them while focusing on his skill set as a dual-threat QB. However, that's all a moot point now as the Browns will eat $4.6 million against the cap once the cap increases in March. It would have cost him just $2.4 million if they had just kept him.

New Browns head coach Hue Jackson, per a source cited by ESPN's Dan Graziano, made it clear internally that he didn't want Manziel to be his starting quarterback. Jackson reportedly hasn't spoken with Manziel personally as of yet.