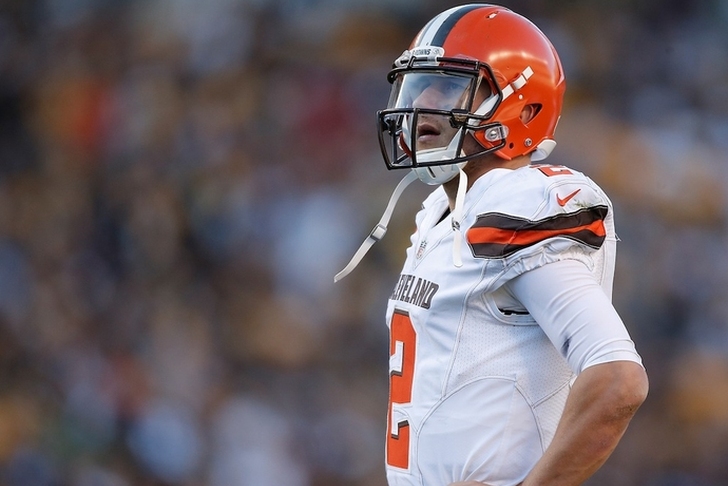 The Cleveland Browns announced that quarterback Johnny Manziel, who the team said would start for the rest of the season, has been demoted to third-string quarterback after video surfaced of Manziel allegedly partying in Texas during the team's bye week this weekend.

"Everyone in this organization wants what is best for Johnny just like we do for every player in our locker room. I'm especially disappointed in his actions and behavior because he has been working very hard," head coach Mike Pettine said in a statement.

"The improvements from last year to this year have been tremendous but he still has to consistently demonstrate that he has gained a good understanding of what it takes to be successful at the quarterback position on this level. It goes well beyond the field. We are going to continue to support him in every way possible, but at this point, we've decided it's best to go with Josh as the starter going forward."

Manziel spent 10 weeks in rehab this summer and left saying he was "a changed man." He was involved in a domestic roadside incident with his girlfriend last month, during which he admitted to drinking beforehand.

"It's a little easier to handle when it's just a one-time occurrence, but when behavior repeats, not just him but with anybody, it's certainly a cause for concern," Pettine said during a press conference earlier on Tuesday. "You have a vision of what you want the team to look like, how you want them to handle themselves when they're out of the building. We talk a lot about it ... so when things like this happen -- and not just him, but just in general -- any team when you have incidents like that [where] a guy knows that he represents more than himself and has issues off the field, it is frustrating."

Josh McCown will start in his place, who has started seven of Cleveland's 10 games this season.

Manziel has passed for 933 yards, five touchdowns, and two interceptions in three starts this season, including a career-high 372 yards in their last game against the Steelers.