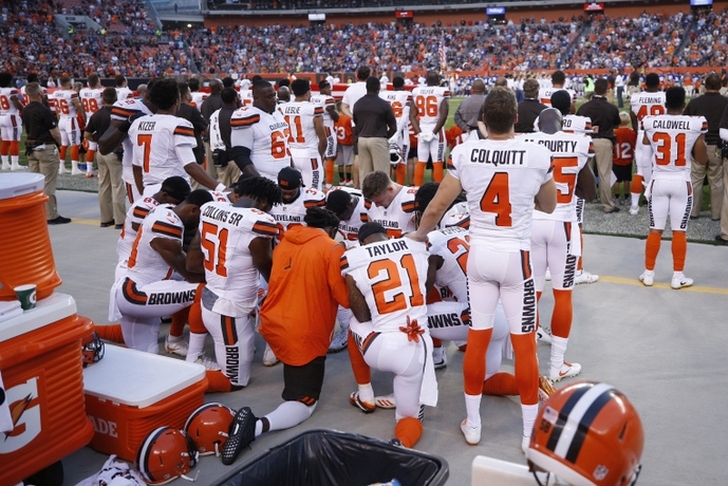 Several Cleveland Browns players knelt in prayer during the National Anthem Monday night. They join a growing group of players protesting racial injustice and police brutality. That has only been amplified by the recent events in Charlottesville, Virginia, something that helped prompt WR Anquan Boldin to retire.

The Browns' protest featured 12 players kneeling, one of the largest anthem protests by an NFL team. The complete list of the players is below, along with other information, including quotes, is below.

Wilds and Crowell were not in uniform. In addition to those players, P Britton Colquitt, cornerback Jason McCourty, quarterback DeShone Kizer, defensive tackle Trevon Coley and offensive tackle Shon Coleman stood alongside those kneeling, placing their hands on their teammates shoulders.

DeValve became the first white NFL player to take a knee during the anthem. He explained his decision in the video below.

#Browns TE Seth DeValve explains why he participated in the prayer during the anthem pic.twitter.com/T8PhmsDKcL

DeValve, as he mentions near the end of that video, has an African-American wife.

"We respect our players; we respect the flag," Jackson said. "Those guys came to me and talked to me about it before they ever made a decision to do it."

First round pick Jabrill Peppers was one of the more notable players to kneel. He spoke to the media after the game.

"There's a lot of racial and social injustices in the world that are going on right now," Peppers said after the Browns' preseason win over the Giants. "We just decided to take a knee and pray for the people who have been affected and just pray for the world in general ... We were not trying to disrespect the flag or be a distraction to the team, but as men we thought we had the right to stand up for what we believed in, and we demonstrated that."

It's unclear if the Browns players will continue to kneel during the anthem.

Check out our Cleveland Browns team page for all the latest Browns Rumors or download the Chat Sports App!