He Delivered For The Cavs, Now It's Time For LeBron James To Save The Browns 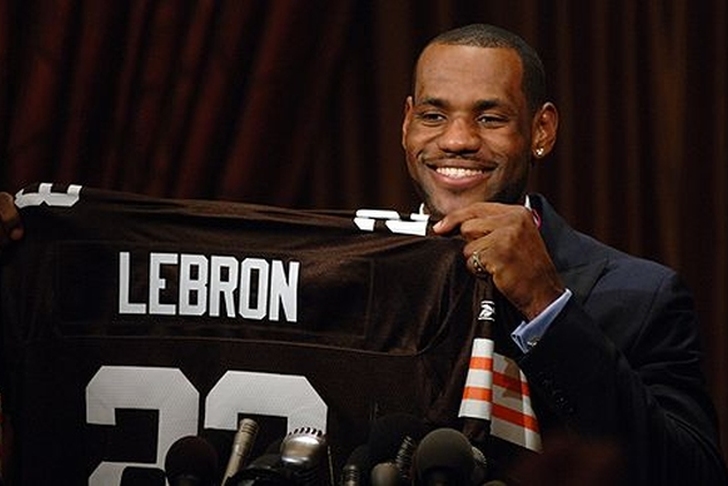 The savior of the Cleveland Cavaliers delivered on his promise Sunday night. After leaving the Cavs, winning titles with the Miami Heat and failing to give Cleveland it's long-desired championship, LeBron James came through with a historic 2016 NBA Finals. LeBron's victory is less than 24 hours old, and there's already speculation on what James will do next. While some (looking at you Stephen A. Smith) will claim LeBron could leave for Los Angeles or even Miami again, James needs to stay in Cleveland. Not as a basketball player, but as a football player. It's time for James to join the Cleveland Browns and become the savior of all of Cleveland.

He's Actually Really Good At Football
States like California, Texas and Florida get all the love as fruitful recruiting grounds, but don't overlook Ohio. It's not far behind and the state takes its high school football seriously. James was already a basketball phenom at St. Vincent-St. Mary's in Akron, Ohio, but he was damn good on gridiron too. Then a 6-foot-7, 230-pound WR, James was a two-time All-Ohio selection. As just a sophomore, he had 42 catches for 820 yards and seven scores. He was even better his junior year, reeling in 61 passes for 1,245 yards and 16 touchdowns. There's really only this short highlight film of James in high school, but there's no doubt he could play.

All the major college programs tried to lure James. A young coach at Notre Dame by the name of Urban Meyer tried to convince James to play for the Fighting Irish, but failed, just like Alabama, Ohio State and the rest.

James might not be quite as athletic as he was in his 20s, but the 32-year-old is in great shape and still a freak of nature. He's listed at 6-foot-8, 250-pounds, and would be one of the greatest red zone threats ever in the NFL. Whether he plays tight end, wide receiver or a Jimmy Graham-type hybrid, James has the talent to play in the NFL. Sure, he'll need some development time and likely learn or re-learn how to run most routes, but James would be an offensive weapon.

James' Legacy
Despite whatever nonsense Skip Bayless is shouting about this time, James has cemented himself as one of the greatest NBA players of all-time. He's done what he was always supposed to do by winning a title for Cleveland, and did it with the greatest three-game stretch in NBA finals history. James might try to make a run at Jordan's six NBA titles, but there's nowhere to go but down for James. So why not try to become the greatest athlete of all-time?

James has said he wants to play in an NFL game and there is a part of him that loves the game. And there isn't a better time than now for him to make the jump to the NFL. He's the same age when Jordan made the jump to baseball, although James appears better suited for his sport switch. This is the likely peak of James' NBA career and after seeing him moved to tears after Game 7, it's certainly his emotional peak. Playing for the Browns would be one of the greatest challenges of his career, but successfully doing so would make him the greatest athlete of all-time.

It's What's Best For Cleveland
James winning that championship for the Cavs was a dream come true for every Cleveland fan. They've been waiting since 1954 for a title, dealing with the heartbreak of "The Drive," "The Fumble" and Jose Mesa. Cleveland loves its basketball, but this is a football town. Cleveland has been through so much, from the blown playoff chances to the team leaving to the recent struggles. The Browns are truly a factory of sadness for the city. LeBron is actually a Cowboys fan, but he'd never be able to leave for any football team other than the one in the city he loves. While Cavs might be disappointed their hero is leaving for the NFL, it's safe to call most Cavs fans Browns fans as well. The city already has its NBA championship, but if LeBron could lead the Browns to an NFL one, the city would need to name him mayor for life and build gold statues of LeBron so the denizens of Cleveland can worship their savior.