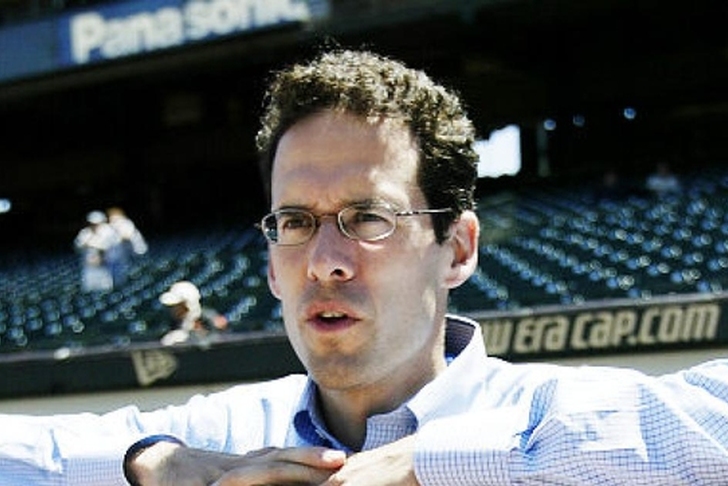 In a move that came out of left field, the Cleveland Browns announced Tuesday that they hired Paul DePodesta from the New York Mets. DePodesta is probably best known as the character Jonah Hill played in "Moneyball."  He'll serve as the team's "Chief Strategy Officer." DePodesta will report to only owner Jimmy Haslam and team president Alec Scheiner. He'll work closely with Executive Vice President of Football Operations Sashi Brown.

Chief Strategy Officer doesn't explain what exactly DePodesta will do for the Browns, and the team's press release isn't much help. It says that "Paul will help members of our player development, high performance and analytics departments maximize their efforts." That's why we're to help explain what DePodesta will do for the Browns. With that in mind, What To Expect From New Browns' Executive Paul DePodesta:

Learning Curve
DePodesta has spent his entire career in the MLB. He started with the Cleveland Indians, before moving to the Oakland A's, where he helped worked with Billy Beane in analytics. He's also spent time with the Dodgers, Giants and Mets. He played football for Harvard, but that's the extent of his football experience. DePodesta himself admits there will be plenty of him to learn.

"Admittedly, there will be an awful lot for me to learn, but I want nothing more than to help bring consistent, championship-caliber football back to Cleveland and Browns fans, and I look forward to starting right away,” DePodesta said.

He wanted a job in the NFL out of college, so this is a bit of dream come true for DePodesta. He also happens to have a position that will give him plenty of power.

Involved In Coaching Search
DePodesta will be involved in the team's search for a new head coach. Given the analytical backgrounds of DePodesta and Brown (more on that below), the Browns could look to target a coach that is on board with an analytical approach. That means using data to determine when to go for it on fourth down and for evaluating players. DePodesta won't make the final call on the head coach, but he will have some input.

Voice In Personnel Decisions
The final call on the 53-man roster is held by Brown, who was only recently promoted. The team will add a general manager to help find those players, but the final call will be Brown's. DePodesta will also have a voice on the personnel calls and draft picks. ESPN went so far as to call it "significant." Expect for DePodesta to use his analytical background heavily here.

Emphasis On Analytics
The Browns' decision to promote Brown and add DePodesta is a clear sign they're looking to go all-in on analytics. There aren't many better at analytics in the MLB than DePodesta, although it remains to be seen if that carries over to the NFL. DePodesta will be expected to bring creative data-driven approaches to the Browns and help the team's player-development, sports-science and analytics departments. Based on the organizational structure, DePodesta will have plenty of leeway. The Browns are desperately searching for a change from their losing ways and they're hoping DePodesta can help deliver that.