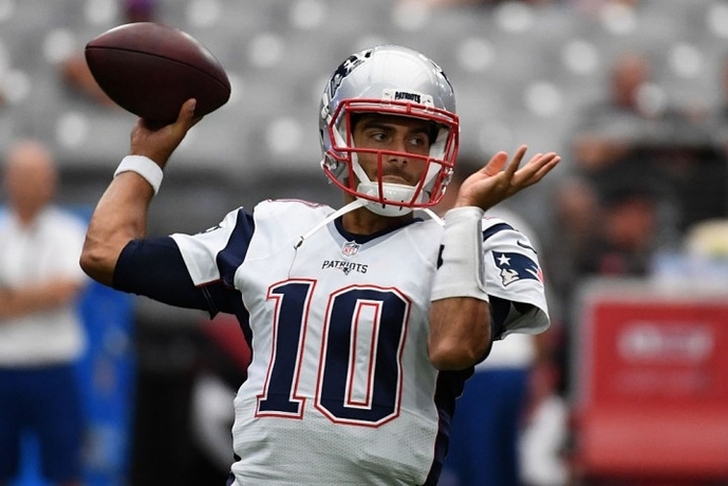 NFL free agency is over a week old, and the Cleveland Browns have made a few notable moves. However, they are still ramping up their efforts to fill some needs after the initial free agency frenzy, and are shifting some of their attention to the upcoming NFL Draft. Here are the latest Browns news & rumors you need to know:

Browns may still trade for Garoppolo
The Browns were heavily linked to New England Patriots backup quarterback Jimmy Garoppolo early in the offseason, but any talks about a trade seemingly died when the Patriots publicly said they weren't willing to trade him. However, Bleacher Report's Mike Freeman says many around the league believe the trade will eventually happen.

Teams still believe the Patriots will trade highly coveted backup quarterback Jimmy Garoppolo, and they believe the destination likely will be Cleveland. The possibility diminishes with each passing day, but team officials with whom I spoke still think it will happen.

I've been able to confirm that the Patriots want two first-rounders from the Browns for Garoppolo, as Mary Kay Cabot of Cleveland.com first reported. The Browns would be stupid to do that (insert Browns joke here).

Most around the league, however, think New England's asking price will come down and there remains a solid chance of a trade happening. We'll see.

Garoppolo passed for 496 yards with four touchdowns and no interceptions in two starts this past season.

Cleveland to hold private workout for Watson
It's no secret that the Browns are looking to acquire a quarterback in the draft if they are not able to trade for Garoppolo, and Clemson's Deshaun Watson is one of their top targets. Cleveland was not at Watson's pro day on Thursday, but that's because they are holding a private workout with him, according to Mary Kay Cabot of Cleveland.com.

The Browns are believed to have conducted a private workout with another one of the top quarterback prospects on Thursday, a league source said.

The Browns have the No. 1 and No. 12 overall picks and are studying all the top prospects in the draft, including North Carolina's Mitchell Trubisky, Texas Tech's Patrick Mahomes and Notre Dame's DeShone Kizer.

Browns to re-sign Pasztor?
Cleveland has placed a major emphasis on upgrading their offensive line this offseason, and while that has meant finding some new replacements, Bleacher Report's Gary Davenport says the Browns wold be smart to re-sign Austin Pasztor.

The Cleveland Browns have taken a badly needed buzz saw to an offensive line that sputtered last year. On paper at least, the additions of guard Kevin Zeitler and center JC Tretter, coupled with the re-signing of guard Joel Bitonio and the presence of future Hall of Famer Joe Thomas, give the Browns the makings of a stout front.

One hole remains, at right tackle. But there doesn't have to be one.

Austin Pasztor wasn't a world-beater as the Browns right tackle in 2016. But he wasn't awful either, ranking 35th among all tackles per the graders at Pro Football Focus. At 26, Pasztor is just entering the prime of his career.

Pasztor is young, versatile lineman with 43 career NFL starts who can play both guard and tackle. Were the Browns to draft a tackle early in this year's draft, Pasztor could at worst be valuable depth as a "swing" lineman. Bringing him back also eliminates much of the need to reach for a tackle at all in a relatively weak draft class at the position.