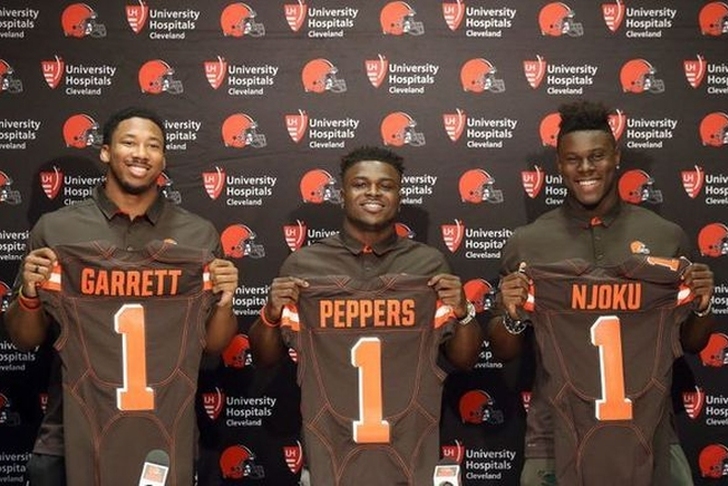 The 2017 NFL offseason is basically over, which means it's time to grade what the Cleveland Browns did this year. Sure, a few more players might be traded, cut or signed, but it's likely the Browns are finished making moves. Below is the Browns' offseason grades, which feature both free agency and the NFL Draft.

As for the grading, teams don't get a "B" just for showing up. A "B" is a good offseason, while an "A" is a great offseason. A "C" is not bad in my eyes, it's simply average at best. It's tough to get a "D," since that basically means a team botched almost everything about the offseason. Obviously there is a lot of opinion here, so hit me up on Twitter if you disagree with the Browns' offseason grade.

Don't worry too much about adding Brock Osweiler. That move was designed to get the Browns more draft picks (or maybe give them the ultimate tanking tool in Brock Lobster). The Browns did make some splashy free agency moves on the offensive line, getting needed upgrades at guard with Kevin Zeitler and center with Tretter. I was a big fan of both those moves. I didn't like going from Pryor to Kenny Britt and the Browns didn't find a proper replacement for Hawkins. The Browns didn't do a ton in free agency with losses or additions, but that's kind of the point for them right now. It's a rebuild and it will take time.

Once again, I love what the Browns did this year. Not only did they get the best player in Myles Garrett, I think they got the best QB in the draft in DeShone Kizer. And they only spent a second round pick on him. Sure, he might not develop in time before the Browns have another high pick, but I think Kizer has the tools teams want. If everything goes right, this could be Cleveland's Khalil Mack and Derek Carr.

Jabrill Peppers has real upside and I think he could thrive in Cleveland. The Browns were one of the top landing spots for him. I don't love David Njoku, but I think it was solid value and he could become a weapon. Larry Ogunjobi could play early as a 3-technique, something the Browns really needed. I don't love him as a player, but it was the right range. Howard Wilson has upside as a corner and could eventually earn a starting job. Johnson played at FSU but he needs a ton of work. Caleb Brantley was an interesting and surprising pick, since Sashi Brown himself said the team was still investigating Brantley and might not keep him. If he's cleared, it's a steal. If not, it could come back to haunt Cleveland. Zane Gonzalez was the best kicker and he could start right away. Matthew Dayes is a favorite of mine, and he could end up as a rotation back.

The Browns might have ended up with five or more starters from this draft before the year ends.

Complete Offseason Grade: A
It's easy to make Cleveland the butt of jokes, but I really like what they've done the past two years. They haven't thrown money around in free agency, instead adding a few players here and there. And most importantly, they're taking the right approach in the draft. Yes, it's a bit of a "moneyball" approach, but in what way is that different than Bill Belichick has done in New England? The Browns are still some time away from being good, but they're heading in the right direction. Hopefully management can be patient.