Browns Head Coaching Candidates: Top 10 Replacements For Hue Jackson (If He Gets Fired) 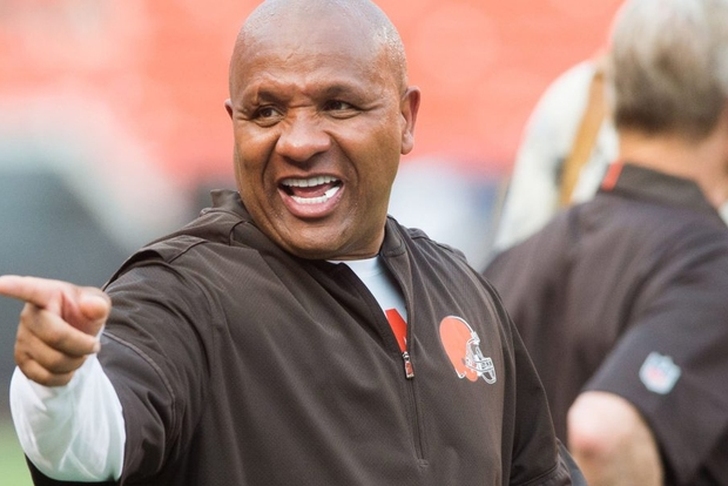 The Cleveland Browns have already said that head coach Hue Jackson will return in 2018, but following just the second 0-16 season in NFL history (dropping Jackson's record with the franchise to 1-31), they'll likely re-evaluate that decision. This means the Browns coaching rumors will continue.

Cleveland has not kept a coach for longer than two seasons since 2008, and while they were hoping to end that streak with Jackson, he simply couldn't overcome his terrible record with the team. The Browns have plenty to offer a next head coach with a bevy of draft picks - including two in the top five overall - and over $100 million in cap space. So, who could they target to replace Jackson? Here are the 10 most likely candidates:

10. Pep Hamilton, Browns offensive coordinator
If Jackson is fired and the Browns want some stability, Hamilton is the obvious option. Cleveland's current offensive coordinator, Hamilton has been linked in the past to some head coaching jobs. Even though the offense struggled this season, he could get some interviews this year. An interview could easily happen since Hamilton fulfills the Rooney Rule.

9. John DeFilippo, Eagles QBs coach
We'll get to another Eagles coach later, but John DeFilippo will generate some head coaching buzz this offseason. It might be one year two early for DeFilippo to get a head coach gig, but I said the same thing about Sean McVay last year. DeFilippo has OC experience, although it came with the Browns. But he gets some credit for the play of Carson Wentz and in what is a down class of offensive-minded coaching options, keep an eye on DeFilippo.

8. Matt Patricia, Patriots defensive coordinator
Entering the 2017 season, Patricia was one of the more coveted coaches. The Patriots defense struggled early on, but has rebounded despite missing a few key players. The former rocket scientist has done a little bit of everything since joining the Patriots in 2004. He's served as an offensive assistant, offensive line coach, a linebackers coach, a safeties coach and took over as the defensive coordinator in 2012. The buzz around Patricia picked up last year and it should only grow. He's just 43 years old and he'll get a head coaching gig in the near future.

7. Jim Bob Cooter, Lions Offensive Coordinator
Cooter came to the Lions in 2014 as the teams' quarterbacks coach before he was promoted in Week 8 of the 2015 NFL season. Before he coached as an offensive assistant with the Denver Broncos and helped guide the Broncos offense to a 2013 Super Bowl appearance. Cooter is in his ninth NFL season and he could be the new face the Brown need calling the shots.

6. Steve Wilks, Panthers defensive coordinator
Wilks is 48 years old and is in his first year as a defensive coordinator. The Panthers defense didn't miss a beat with Sean McDermott in Buffalo this year, a credit to Wilks. He's well-regarded in the coaching world with a background in the secondary. Due to the Rooney Rule, Wilks is a good candidate to get an interview. However, another coach with one year of DC experience who specializes in DBs might not be the best idea for the Browns.

5. Frank Reich, Eagles offensive coordinator
Reich is one of the hottest names in the NFL right now given the success of the Eagles this season. Carson Wentz, in his second year, emerged as one of the best young quarterbacks in the league before going down. Reich would likely help develop whoever the Browns elect to draft. The Eagles' creative offense is a major reason why they have had success this season and the Browns will be looking for a fresh start. Reich will be connected to multiple jobs this offseason.

4. Josh McDaniels, Patriots offensive coordinator
McDaniels has rebuilt his reputation while leading the Patriots’ offense for the past five seasons after a less-than-successful head coaching debut in Denver. Its been rumored for several years that McDaniels has a strong desire to be an NFL head coach again should the right role open up. With Cleveland needing likely drafting another quarterback, hiring an offensive mind like McDaniels would be perfect. But there are two potential issues for the Browns and McDaniels. One, he's been linked to joining a team in a pairing with a general manager he wants. Two, everyone wants McDaniels and since he'll have his pick of teams, he might elect to pass.

3. Todd Haley, Steelers offensive coordinator
I'm not a huge fan of Todd Haley, but he could be a top option for the Browns. Haley had a rough go of things in Kansas City, but he had success with the Cardinals as the OC before taking the Chiefs' job. He's rehabbed his stock in Pittsburgh, although there are reports he and QB Ben Roethlisberger are having some issues. At the very least, Haley seems likely to get an interview if Jackson leaves.

2. Matt Nagy, Chiefs offensive coordinator
The Chiefs' offense is back on track lately and there's one notable change the team has made: giving Nagy play-calling duties. The offense is clicking again and that will help Nagy's job chances. Just like Doug Pederson before him, Andy Reid's OC will draw head coaching interest.

1. Dave Toub, Chiefs special teams coordinator
Toub is one of the greatest special teams coaches in the history of the NFL. He has turned the Chiefs special teams into one of the most feared units, as he has at all of his previous stops. He is respected throughout the NFL and has a great relationship with the players and front office. At 55 years old, Toub is older than many first-time head coaches but will draw interest after having interviews last season. Toub would be a strong hire if the Browns nabbed a gifted and young OC to pair with him.