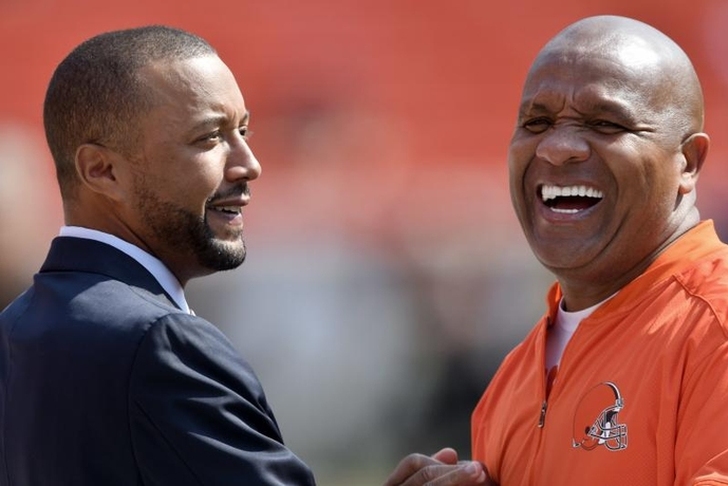 After winning just one game over the course of the last two seasons, the Cleveland Browns are shaking up their front office (again) by firing executive vice president Sashi Brown, the team announced.

“We have great appreciation and gratitude for Sashi’s commitment and leadership to our organization but believe transitioning to someone with strong experience and success in drafting and building consistently winning football teams is critical to the future of the Cleveland Browns," owner Jimmy Haslam said in a statement. "Today we informed Sashi that we were going in a new direction. The 2018 draft and offseason is pivotal for our franchise, we need to ensure that we maximize our opportunity for success; with our picks, free agency and building our roster. Hue Jackson will remain our coach and will return for the 2018 season but we feel it is necessary to take significant steps to strengthen our personnel department. We have begun the process of having productive conversations regarding leadership of our football operations and will provide further updates when appropriate. We thank Sashi for all his hard work and dedication to the Cleveland Browns.”

Brown was the lead decision-maker on all personnel decisions over the last two years. According to NFL Network's Ian Rapoport, Cleveland has been plotting this move for a few weeks.

Behind the scenes over the past few weeks, the #Browns have privately vetted GM candidates — with eyes on former #Chiefs GM John Dorsey.

However, Cleveland will retain head coach Hue Jackson despite his 1-27 record with the team, saying they are focused on improving their personnel department first.

"Hue Jackson will remain our coach and will return for the 2018 season but we feel it is necessary to take significant steps to strengthen our personnel department." — Jimmy Haslam pic.twitter.com/9lOMlhbSCW

Jackson will now be the first Browns coach to last more than two seasons at the helm since Romeo Crennel, who was there from 2005-2008.

The Browns have not posted a winning record since 2007 and won more than five games in a season just once in that time frame. They also haven't made the playoffs since 2002.