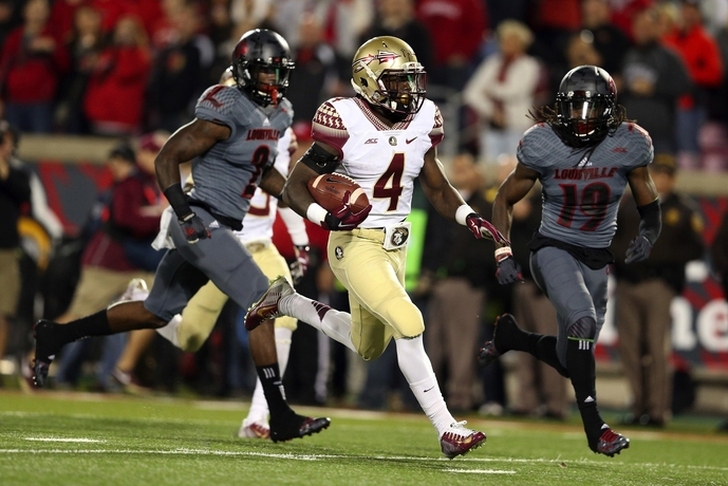 The start of the 2017 NFL Draft is less than one month away and the Cleveland Browns are looking to add more young, impact players as they continue their rebuild. With two first round picks (including No. 1 overall) and two second rounders, the Browns are in position to make some noise in the draft. Here are all the latest Browns draft rumors and news you need to know.

Browns Hosting Dalvin Cook
The Browns appear to at least have some level of interest in Florida State RB Dalvin Cook, as they're bringing him in for a visit.

The #Browns, picking No. 1 and No. 12, are hosting #FSU RB Dalvin Cook on a visit today, source said. There are few big-name guys with him

It's an interesting move, since the Browns have Isaiah Crowell and Duke Johnson already on the roster. There's no chance the Browns take Cook at No. 1 overall and even No. 12 seems early given the current roster outlook. But perhaps the Browns are doing their work in the event off-the-field problems cause Cook to slide to the second round. It appears the Browns are high on Cook.

Mike Williams Latest
The former Clemson star will be a first round pick and could be the first WR off the board. Williams recently said he has visits scheduled with the Browns, Ravens and Titans, among others. It appears that visit will happen shortly.

Depending on how the draft falls, Williams could be an option at No. 12 (or a trade target). Even after adding Kenny Britt and drafting Corey Coleman last year, wide out is an area the Browns can upgrade. That's especially true if Corey Coleman is moved to the slot.

With the Browns almost certainly going to select Myles Garrett No. 1 overall, the decision to bring in McKinley is an interesting one. Perhaps the Browns are just doing their due diligence in the event McKinley falls out of the first round.

Browns Hosted Teez Tabor
After a poor showing at the NFL Combine and Pro Day (thanks to brutal 40 times), Florida's Teez Tabor has watched his draft stock take a hit. But the Browns are one of the teams showing interest.

The #Browns worked out #Florida CB Jalen Tabor today, source said, one of several big-name prospects they either hosted or worked out today

Tabor has some of the best ball skills in this year's class and has the production the Browns' regime seems to look for. He's an option at some point on Day 2 and could contribute early at corner.