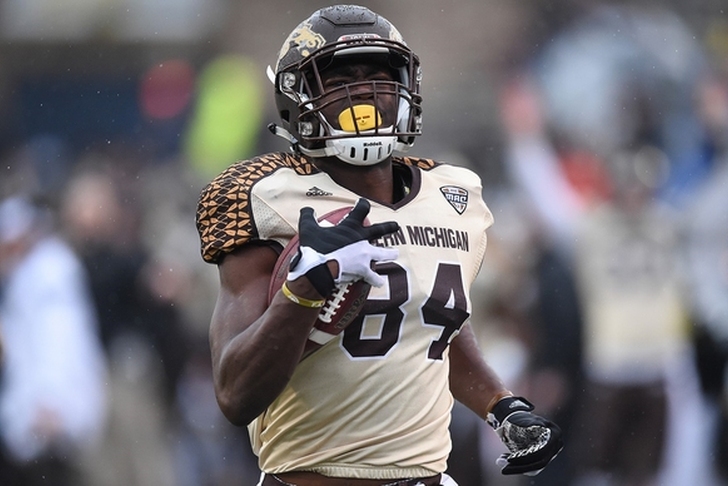 The start of the 2017 NFL Draft is less than three weeks away, and the Cleveland Browns are the subject of numerous draft rumors. That's not unexpected given the Browns have two first round picks. Here are all the latest Browns draft news and rumors you need to know.

Browns Love Corey Davis, Will Consider Him At No. 12
The Browns will be able to go several different directions with the No. 12 overall pick this year. One option will be Western Michigan WR Corey Davis, per Matt Miller of Bleacher Report.

If you're looking for a team-to-player connection, I've heard from scouts in Cleveland that the team "loves" Corey Davis and would strongly consider him at pick No. 12 if it doesn't trade out of the spot.

The Browns spent a first rounder on Corey Coleman last year and replaced Terrelle Pryor with Kenny Britt this offseason, so it's not a major need. However, Coleman could play the slot and Davis would give the Browns another outside weapon. The Browns could also look at a QB or a defensive player at No. 12.

Latest Prospect Visits
The Browns are limited to 30 pre-draft visits with prospects and they're added two more in the past days: Gareon Conley and Obi Melifonwu.

Connecticut safety Obi Melifonwu is taking a top 30 visit today with the Redskins, according to a source, after visiting Browns on Friday

Conley could be an option at No. 12 overall, serving as a future No. 1 corner for Cleveland. That might be on the early side for him, but it's unlikely he's on the board for Cleveland at the top of the second. Melifonwu might be, but there's a good chance he's a first rounder. Both could be potential trade targets for the Browns as well.

"From my understanding, the Patriots do not want to deal Jimmy Garoppolo," Rapoport said. "They really just don't, whether it's to the Browns, whether it's to the Texans ... They do not want to give up someone who they consider a franchise quarterback for a pick this year ... The Browns may make a late run at Garoppolo, but they do not seem to believe there's any hope there."

That means the Browns will need to draft a QB if they want to find a franchise QB this year (assuming it's not Cody Kessler). Mitchell Trubisky and Patrick Mahomes are two options at No. 12 overall.