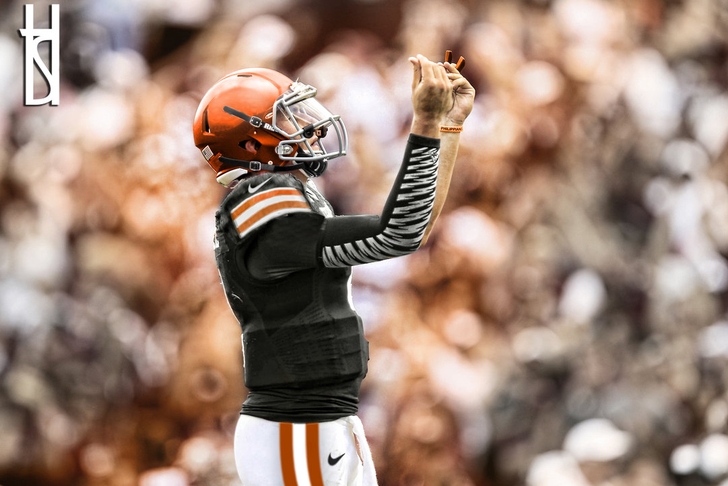 College football fans have been blessed to watch Johnny Manziel play for Texas A&M the past two seasons. On the other hand, NFL fans - especially Cleveland Browns fans - have had to suffer through watching a horrible display of quarterback play led by Brandon Weeden, Thad Lewis, Bryan Hoyer, and Jason Campbell. The quarterback play for the Browns has been downright awful and has caused the Browns to be completely irrelevant for a very long time.

Only one man can completely change all the nonsense at the quarterback position for the Browns - Johnny Manziel, a.k.a., Johnny Football. Not only have the Browns never won a Super Bowl, but they've never even played in one. Johnny Manziel will cause a complete reversal of fortunes for the Browns, assuming they are able to draft him with the number four overall pick in the upcoming NFL Draft. The only thing that should hold the Browns back from drafting Manziel is another team swooping him up before they do.

Johnny Manziel often gets criticized for his off the field antics, as well as his size. In today's NFL, size should not matter. Russell Wilson, for example, just led the Seattle Seahawks to a Super Bowl victory, and he is only 5'11". Manziel is listed at exactly 6'0" and plays a very similar style of football to Wilson. Both Manziel and Wilson are magicians when it comes to escaping the pocket, and they both possess terrific leadership qualities. Take a look at these clips of them escaping hopeless situations to create positive plays for their teams:

Russell Wilson is featured here running around in circles for an amazing 6-yard gain:

Johnny Manziel makes one of the craziest, most impressive plays of the year here:

Another comparison could also be made of Johnny Manziel to Hall of Fame quarterback Steve Young. They both play with an edge and possess blazing speed for a quarterback. Young was also a master at being able to escape the pocket and make big plays with his legs. Not only are they both physically gifted, but they also have extremely high football IQ's, which makes them even more dangerous. Check out these two ridiculous plays by Young and Manziel:

Johnny Manziel avoids the Alabama defender and surprises everybody with a 10-yard touchdown pass. Even the broadcaster thought Manziel was done.

Manziel is a dual threat quarterback, which is often times something he doesn't get enough credit for. As seen in the videos above, he uses his legs to enhance his passing abilities with great instincts. He plays his best football when he plays with reckless abandon. This past season for Texas A&M, he threw for 37 touchdowns and just 13 interceptions. There is no doubt that his confidence level is at an all-time high after dominating multiple defenses for the Aggies.

Just because Manziel is considered a running quarterback, doesn't mean he has no passing abilities. He showed flashes of greatness throwing out of the pocket in college, which can certainly translate to the NFL. Arm strength is another desirable attribute that Manziel possesses, which is also often times overlooked. The talent is certainly there for Manziel, and as long as he can remain out of trouble off the field, the Browns would be in great shape with his presence.

Johnny Manziel makes plays that aren't necessarily accounted for in the box score. He's the type of player that can throw for 150 yards in a game, but much like Russell Wilson, will find a way to make the biggest plays of the game when it matters most.

The Browns currently have some great pieces on their roster, which include: Josh Gordon, Jordan Cameron, Joe Haden, and Joe Thomas. Manziel wouldn't lack for weapons in the passing game, but would definitely need some help out of the backfield. Gordon and Cameron emerged as stud offensive threats last season for the Browns, but the Browns suffered in the running game after trading away Trent Richardson to the Indianapolis Colts early in the season.

The Browns will have plenty of opportunities to draft a high quality running back in the upcoming NFL Draft because they have 10 picks, including 3 of the first 35 selections in the draft. Acquiring a running back either through free agency, or the draft, will be a key to the Browns reaching the Super Bowl next season.

The Browns fired head coach Rob Chudzinski immediately following the end of last season, and recently hired the Buffalo Bills defensive coordinator, Mike Pettine. They also recently fired GM Michael Lombardi, and expect CEO Joe Banner to leave the team in the near future. While big changes like this are often perceived as negative, it shouldn't change the way the players show up on game day.

Mike Pettine will be a great fit for the Browns. Pettine is a defensive minded coach who learned many of his defensive philosophies from New York Jets head coach, Rex Ryan. He turned what was a very mediocre Bills defensive unit into a respectable bunch who opposing teams couldn't just ignore and score on at will. He will be inheriting some very high potential talent with the Browns on the defensive side of the ball. Improvement on defense will be key for the Browns to reach the Super Bowl.

Pettine will look like an even better coach if Johnny Manziel is drafted. Even though Pettine is considered a defensive specialist, having Manziel in his back pocket will make the team that much more dangerous. The offense would be explosive with the addition of Manziel and a running back, and the defense would surely improve behind the leadership of Pettine.

Trading up a couple spots from the number four slot wouldn't be a bad idea for the Browns to ensure that they get Manziel. He would certainly be worth surrendering a couple of their 10 picks in this year's draft. There's no doubt that he has what it takes to vault the Browns into unchartered territory. Johnny Football is the answer that the Browns have been searching for, for a long time.