Previewing Colts-Browns: 5 Questions With Todd From The Fan Indiana 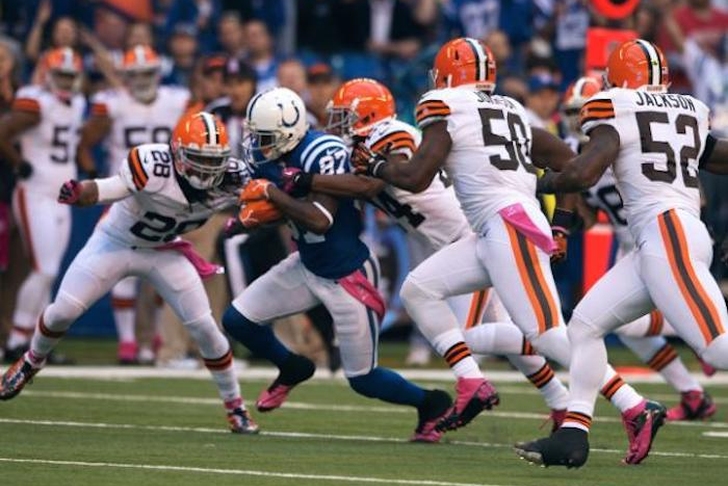 The Colts and the Browns both have plenty to play for when they meet Sunday at FirstEnergy Stadium in Cleveland.

At 7-5, Cleveland remains in the playoff hunt in an AFC North that is still wide open. But with two losses in their last three games, the Browns are desperate for any win, and Indianapolis provides the perfect chance for a big one.

For the 8-4 Colts, a win today would clinch the AFC South and already put Indianapolis in the postseason for the 11th time in the last 12 seasons.

To help us preview this important matchup, we caught up with Todd Burlage from The Fan Indiana for a preview.

Which offensive/defensive matchup should fans keep an eye on?

It will be interesting to see how Cleveland quarterback Brian Hoyer handles an improving and opportunistic Indianapolis defense. Named the starter again after getting pulled against Buffalo last Sunday for rookie Johnny Manziel, Hoyer (10-5 as a starter) faces a Colts defense that is tied for third in the AFC with 34 sacks and tied for fifth in the conference with 20 takeaways. Expect Browns head coach Mike Pettine to get Manziel into the game early if Hoyer has a sluggish start.

Even with Indianapolis quarterback Andrew Luck putting together an MVP type of season, clearly the inconsistency and sketchy production in the running game remain a major concern for the Colts, and it starts with struggling running back Trent Richardson. Averaging an unthinkable 2.0 yards per carry in his last three games, Richardson has been consistently outplayed by teammates Boom Herron, Donald Brown and others, yet, the former Alabama tailback continues to get his carries.

Who’s the most underrated/under-the-radar player on the Colts?

After playing in the shadow this season of standout wideouts T.Y. Hilton and Reggie Wayne, rookie receiver Donte Moncrief seized his first career start last week with three catches, 134 yards and two touchdowns in a 49-27 win over Washington. Steadily improving, Moncrief has made 15 of his 24 catches for the season and scored all three of his touchdowns in his last five games.

What’s your prediction for the final score?

Perhaps the greatest strength of the Colts is their ability to avoid the upset and beat teams they are supposed to beat, usually in dominating fashion. The Browns have been a surprise team this season and amazingly remain in the playoff hunt into December. But with a 3-2 record on the road and three wins in the last four games, expect the Colts to get out of Cleveland with a difficult 31-27 win.