Maybe Next Year Greg Little Will be on the Madden Cover 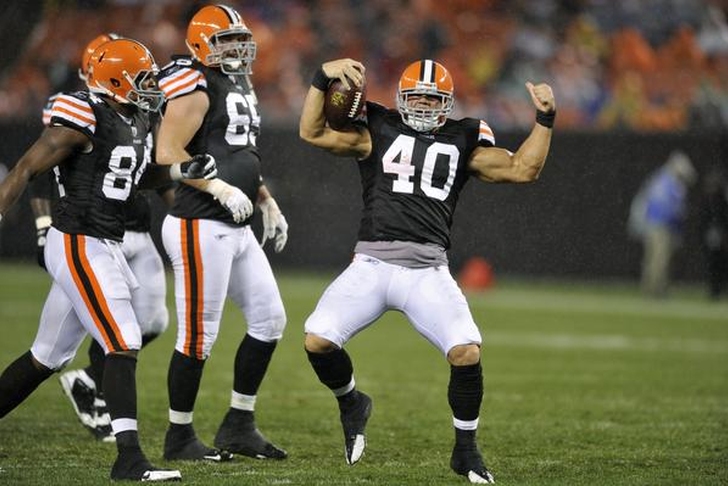 In a normal NFL season, this time of the year is by far the slowest news period.  Throw in work stoppage that counts among its biggest highlight a few tersely worded legal briefs and interest is waning to say the least.    Things are so dire I have actually watched several full-length baseball games this year.  Thank you Tribe.

But the heightened summer football slump does provide an opportunity to look back. And when our man Peyton is going to be on the cover of Madden ’12 it reminded me how strange and incredible his path to stardom really has been.   Think back to one year ago and remember that the Browns fans were excited at the thought of Jerome Harrison who was just 2 games removed from a 275 yard performance and recently drafted Montario Hardesty.  Peyton Hillis was mired behind both of them AND James Davis.

Actually go back a little more than a year and Peyton Hills was essentially a throw-in for the deal that jettisoned Brady Quinn out of town.  He was secondary compensation in a deal that Denver made for a guy that couldn’t outperform Derek Anderson.  He was the NFL’s version of an expiring contract used in an NBA trade to even out the salaries, or baseball’s proverbial “player to be named later”.

More Browns fans were probably upset that the team had given up on Quinn than the fact that they received a back-up running back in return.  And yet now he is the 21st century’s version of the Wheaties cover boy.

It started slowly.  A superhuman 9 yard run in the pre-season.   A collision usually only seen in Hollywood in week 1.  But mostly, it was the injury to Hardesty and a unexplainable lack of production from Harrison that lead the Browns to finally stop ignoring him.  He had his breakout game in week three against the Ravens in a loss, and had his second straight 100 yard game the following week in the team’s first win against the Bengals.  Harrison was traded away a week later, just 5 games into the season.

Given that Harrison had nearly 600 yards in the final 3 games, it’s a debate as to whether the more compelling story is Hillis’ rise, or Harrison’s fall.  And it’s also a cautionary tale about not getting attached to running backs that have a sudden burst of success (see also:  Green, Droughns, Lewis, et al).  Hopefully Hillis will be able to find more enduring success than running backs of the past, even if he does have to split time with Hardesty this year.

If there is a year.