Is Colt McCoy The Cleveland Browns QB of the Future? 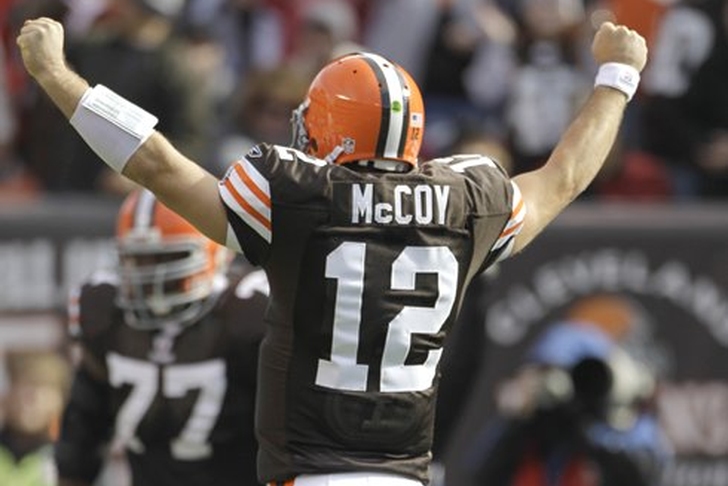 I have learned one thing about Browns fans in watching the team shuffle through Quarterbacks for the past 12 years.  That is that no matter who the QB is, there are only two opinions that you will find about him amongst fans:  He is either a total bum who needs to be replaced immediately, or he is definitely the team’s savior and the guy that is taking the team to the Super Bowl, and should you disagree you are not a real fan.

One thing I am sure about though is that nobody really knows.  Every Browns fan is probably guilty of chanting for at least one of the backups whose names ended in a Y sound and was perfect for chanting i.e Kelly Holcomb, Charlie Frye, Brady Quinn (on a side note, could it be that the easier it is for the QB’s name to be chanted, the worse he is?).  I myself am guilty of thinking that Tim Couch would eventually be the man.  Heck, I kinda  still think he could have been.  But I’ll be the first to admit that it’s almost impossible to predict how good a QB will be in the NFL.

After 12 starts by Colt McCoy so far the only thing that is clear is that it is still too early to tell.  I feel like I could make a convincing argument either way.  On one hand, he has only started 12 games so far, has a terrible receiving corps, is already on his second coach and second system, has had a very shaky offensive line this season, and yet he is on pace this year to throw for 3600 yards, 24 TD’s, and just 12 INT’s.

But on the other side, his Yards Per Attempt of 5.7 this season is paltry even amongst the likes of other Browns QB cast-offs, and his career QB rating of 76.3 doesn’t do much to make you feel good when you consider it’s only a point higher than the aforementioned Couch.

Back to the positive, he seems to have all the leadership skills and intangibles that you want in a franchise QB.  But then again he seems to lack the ability to throw strong down field passes, which is something that can’t be learned or acquired.

At times he has displayed tremendous accuracy, but it’s easy to do that when you aren’t throwing the ball further than 10 yards down field.

Cam Newton has already thrown for over 300 yards 3 times in just 4 starts,  something Colt has done only once in 12.  But would Newton have the same numbers with the Browns offensive cast?

Ultimately the most disappointing aspect of the situation is that the Browns management put him in a position where he was clearly installed as the starter so that the fans won’t be clamoring for the back-up, but then failed to give him any weapons with which to gauge his ability and paired him with a rookie head coach.

Would any of their receivers start for another team in the league?  Definitely not Brian Robiskie, and probably not Massaquoi.   Evan Moore seems to be a matchup nightmare, and the Browns did extend his contract, but then barely get him on the field.    It’s almost unclear if Heckert and Holmgren really wanted to get a good look at McCoy, or if they were setting him up for failure from the get-go.

Bottom line at the quarter pole of the season is that we don’t know much more about the Browns QB than we did at the beginning of the year.  I definitely had higher expectations of the offense, but can definitely see why it’s not exactly clicking.  Colt seems to be doing about as best he can with what he has to work with, but how many QB’s have we said that about in the past?

For once it would be nice for someone to take the reins and leave no doubt.