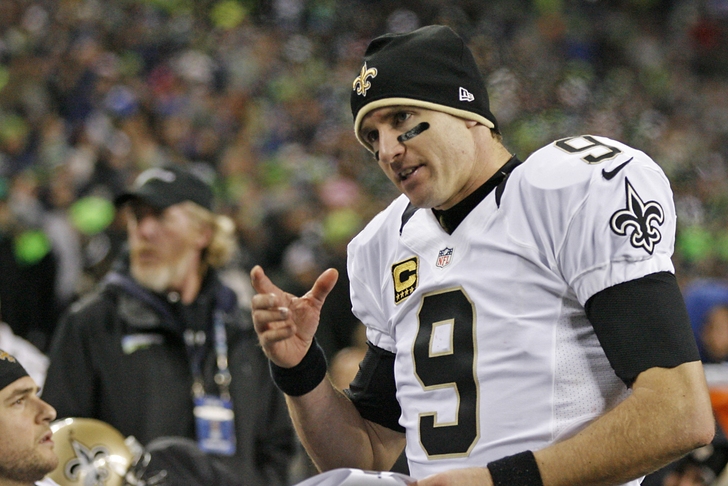 A rare mistake-filled first half for Drew Brees and the New Orleans Saints was capitalized on by a young and opportunistic Cleveland Browns squad. Despite a late TD drive by the Saints, Browns safety Tashaun Gipson's INT return for a score was enough to give Cleveland a 16-10 lead going into the break.

After a Cleveland punt to start the second half proceedings, both the Saints and the Browns would engineer impressive touchdown drives in the middle of the third quarter - with Drew Brees' second TD pass to TE Jimmy Graham answered by a workmanlike, 14-play, 80 yard scoring drive by the Browns (topped off by RB Terrance West's 9-yard TD run off of left tackle).

New Orleans would keep swinging in their own right, slowly marching right back down the field for a 13-yard, 80-yard TD drive capped by a one-yard Mark Ingram rush.

The teams would trade punts as the tension became palpable in the Dawg Pound. However, that tension would be released in epic fashion (for the Browns) on a one-to-remember game-winning drive by QB Brian Hoyer. Going  85 yards in 14 plays in mesmerizing fashion, Hoyer set up a 29-yard chip shot for Billy Cundiff with just seconds left to seal the victory.

Key Player: QB Brian Hoyer, Browns - Wow. Just wow. With the Cleveland fan base and media seemingly split on what to with rookie Johnny Manziel, Hoyer reminded everyone why he is in there in the first place.

Turning Point: That insane final drive. The Cleveland Browns created bedlam at home with a finish to remember and perhaps reframed their entire 2014 season.

What We Learned: The New Orleans Saints' defense is in need of some work. After falling prey to two game-winning drives two weeks in a row, the Saints and head coach Sean Payton have a lot of questions to answer as they fall to 0-2.

What's Next: The Browns host the Baltimore Ravens in an AFC North showdown, while the Saints welcome in the Vikings.