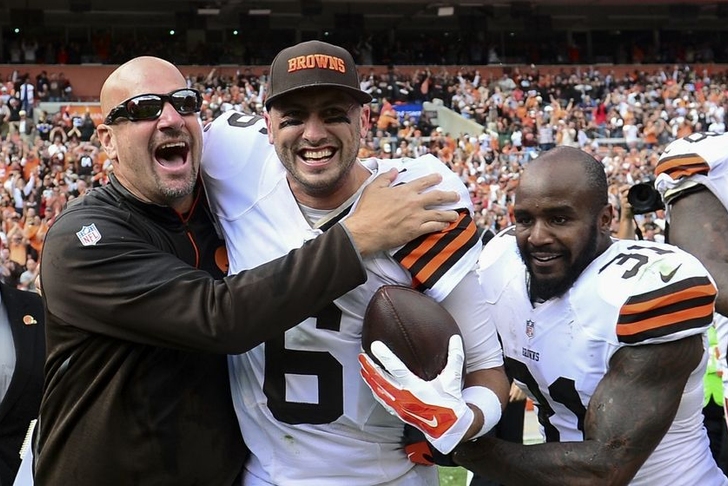 Tennessee totally dominated the Browns in the first half, leading 28-3 at one point.

However, things totally changed in the second half. A touchdown right before the half gave Cleveland some momentum, and they used that to propel themselves for the rest of the game.

Down 28-13, the Browns went for it on 4th down from the Tennessee 4-yard line and didn't get in the end zone. The Titans weren't able to do move the ball away from their own end zone, and Cleveland blocked the ensuing punt, knocking it out of the end zone for a safety.

That seemed to revitalize the Browns, who went down the field and scored on their next drive, cutting the lead to six.

It seemed they had blown their last chance when Hoyer threw an interception with just over three minutes to play, but the Cleveland defense managed to give them the ball back. From there, Hoyer marched his team down the field and scored the winning touchdown with just over a minute left.

Turning Point: It has to be the game-winning touchdown, right? Down for the entirety of the game, Brian Hoyer hit Travis Benjamin in the end zone with just over a minute left to tie the game at 28, and the extra point gave the Browns the win.

Key Stat: Both sides were fairly even on the stat sheet across all categories, as you'd expect in a game this close. However, Cleveland was able to move the ball up and down the field the whole game (460 total yards), they just weren't able to convert in enemy territory until late in the game. With how well they were moving the ball, you knew they were going to start capitalizing eventually, and they did.

Tennessee MVP: Backup quarterback Charlie Whitehurst came in after Jake Locker left the game with an apparent head injury and didn't let the offense miss a beat. He finished 13-21 passing for 191 yards and 2 TDs without throwing an interception.

Cleveland MVP: Ben Tate was the Browns' most consistent offensive player in today's game, carrying the ball 22 times for 123 yards.

What’s Next? The Browns improve to 2-2, and look to go over .500 in a home contest against the Steelers next weekend. Tennessee falls to a miserable 1-4 and now needs a win against a bad Jaguars team next Sunday.