If Brian Hoyer is the Answer in Cleveland, What Happens to Johnny Manziel? 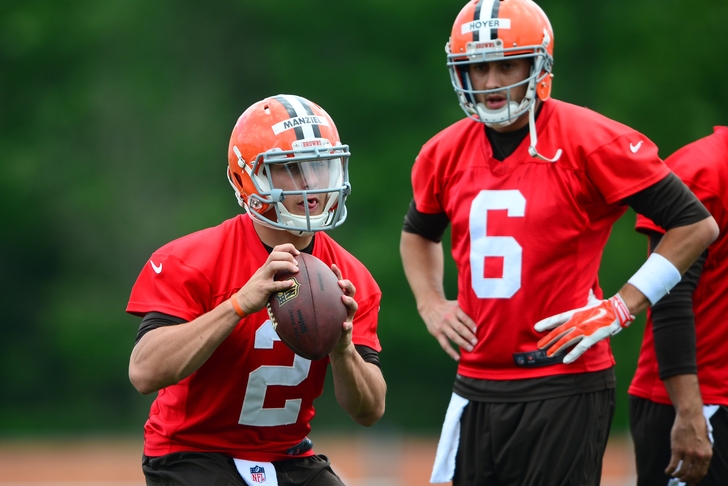 The Browns have been searching for a stable quarterback since the team came back into the league as an expansion franchise in 1999. Derek Anderson looked like the solution when he threw for 29 touchdowns in 2007, but he was released by the team two years later.

Now, the unthinkable has happened - the Browns actually have a good quarterback. The problem is, they also have a first round quarterback on the bench who has a media following Tim Tebow would be proud of. So what should Cleveland do with journeyman-turned-starter Brian Hoyer and Heisman-hot-shot Johnny Manziel?

Keep Hoyer as the starter, Manziel as the backup Simple case of 'if it ain't broke, don't fix it'. Cleveland is 2-2 this year with Hoyer as the starter, with both losses coming on game-winning field goals as time expired. If the Browns had won both those games, this wouldn't even be a discussion. Plus, having Manziel as a backup in case Hoyer gets hurt again is be a huge bonus.

This will only happen if the Browns start doing poorly and/or Hoyer's performance starts to diminish, though both are trending upward right now. Everything in the NFL changes on a week-to-week basis, but this is looking like the most unlikely scenario right now.

Manziel is going to want to play sooner rather than later, especially with a lot of other rookie quarterbacks starting to get a chance to play now. Manziel's stock is still high, so Cleveland could get a lot in return for him, but means they'd have to commit to Brian Hoyer for the long term - something I don't know if they want to do.

This is a very similar situation to what San Diego went through with Philip Rivers and Drew Brees. They drafted Rivers to be their long-term quarterback, but Brees was playing too well to take him out. After the season, they let Brees walk via free agency and went with Rivers from that point on.

This is the most likely scenario, and it will probably happen at the end of the year with a Hoyer sign-and-trade. Hoyer also becomes a free agent after this year, though the Browns would be stupid to let him walk for nothing if they know they're going to go with Manziel long-term. However, if Hoyer keeps playing like he is right now, it's going to make Cleveland's decision a lot more difficult.