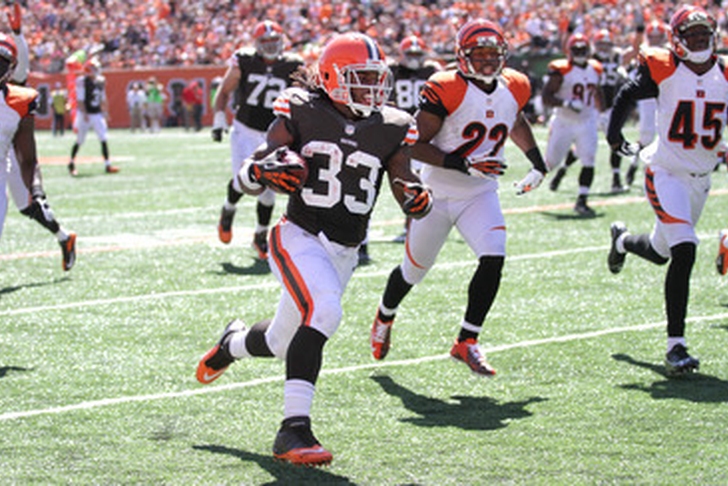 When the Cleveland Browns traded Trent Richardson, many Browns fans were ready to burn the team’s headquarters in Berea, Ohio to the ground. A lot has already been covered about Richardson’s potential and his injury issues, but the Browns are already replacing his production with less than stellar running backs.

One day after trading Richardson, the Browns added veteran journeyman Willis McGahee to their running back corps. McGahee joined the team of Chris Ogbonnaya and Bobby Rainey as the current healthy backfield of the Cleveland Browns (Dion Lewis the back-up running back suffered a season ending injury during the pre-season). Ogbonnaya and Rainey had a combined 1 touchdown through the ground for their careers. That touchdown was scored by Ogbonnaya in 2011.

Richardson in his rookie season rushed for exactly 950 yards on 267 carries, which breaks down to an average below 4 yards per carry (3.6 to be exact). That is not the production you need to see out of someone who was taken with the third overall pick of the draft. Richardson even this year was not producing at a high level in Cleveland behind a Browns line that is being heralded as one of the better O-Lines in football, despite giving up 22 sacks already (although Brandon Weeden’s poor decision making under pocket pressure must be attributed for at least 5 of those sacks).

Last Thursday night, Cleveland beat the Buffalo Bills despite Brian Hoyer going down with a torn ACL. For anyone who watched the game, they saw that the running game was the most efficient part of the offense, despite what the stat sheet says. Willis McGahee rushed for 72 yards and a touchdown on 26 carries. That averages to about 2.8 yards per carry.  McGahee’s career average is 4.1 yards per carry. Richardson’s is just 3.5 YPC.

McGahee, Ogbonnaya and Rainey are obviously not in the company of elite NFL backs like Adrian Peterson, Matt Forte or Arian Foster, but they do combine to make a decent ground attack for Cleveland. The Browns 2013 season will be defined by how they play in tight games, and to play well they need an efficient running attack. Trent Richardson was clearly not the answer in Cleveland, and “the committee” has already proven why.