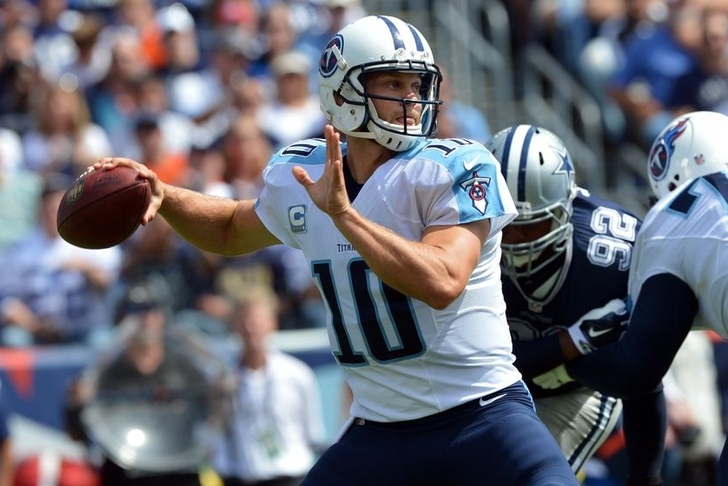 Both teams came into today's game needing a serious boost to their season, hoping a win today could get them back on track. Tennessee's defense has been up to the task, limiting the Browns offense in the first half. The Titans offense has capitalized, led by often-criticized quarterback Jake Locker, and have the big lead at the break. Unfortunately for them, Locker suffered an apparent head injury late in the half and is status for the rest of the game is in question.

Biggest Play: On a 3rd-and-9 just inside the 50, Cleveland cornerback Joe Haden was called for pass interference, keeping Tennessee's drive alive. Locker hit Kendall Wright for a touchdown three-plays later, and the Titans have had the lead ever since.

Biggest Surprise: Jake Locker! There have been rumblings surrounding the Titans that they need to move on past Locker and find a true franchise quarterback, believing he isn't that guy. Apparently nobody told Locker (or somebody made him very aware), as he has been dynamite so far today.

Cleveland Key Player: The Browns offense has struggled, but running back Ben Tate has been the lone bright spot that brings some hope for the second half with 77 yards on only 11 carries.

Tennessee Key Player: It obviously has to be the aforementioned Locker. He's been accurate throwing the ball (8-11, 79 yards, 1 TD) and has been a factor on the ground (34 yards, 1 TD). Though his status is up in the air for the second half due to that injury, he was the Titans' best player in the first half.

Who Has The Edge? Cleveland's offense has been atrocious so far, and they don't seem like they're going to be able to put up the number of points they'll need to get back into this game. The Titans seem to have this one under control.