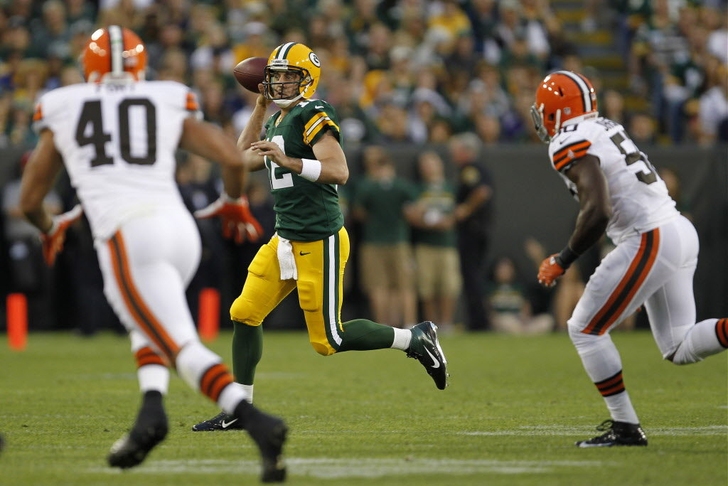 In Week 7 of the NFL season, the Cleveland Browns (3-3) will take on the Green Bay Packers (3-2) at Lambeau Field in Green Bay, Wisconsin.

Green Bay’s QB, Aaron Rogers, is not only all over your television screen in commercials for State Farm, but should also be all over your radar for big performers. Although Rogers hasn’t performed up to expectations thus far this season, he came up big last week on the road against the Baltimore Ravens where the Packers irked out a 19-17 win. We all know what Rogers is capable of (the 400 yard, five touchdown, performances he LOVES to have when you’ve just counted him out) but can he do it without a healthy receiving corps? Rogers is one of the best quarterbacks in the League, but hasn’t shown it yet this year. Look for him to turn it around.

Cleveland’s QB on the other hand, Brandon Weeden, is having a season that makes Browns fans quiver in fear every time he drops back to pass. Despite having a decent statistical day against the Detroit Lions on Sunday (a 31-17 loss for the Browns) where he threw 2 touchdowns, it was the 2 interceptions Weeden threw that elicited huge groans out of Cleveland fans. Weeden in the 2nd half of games this season has been truly awful, throwing ZERO touchdowns after halftime in his 3 starts this season.

Green Bay’s running game has been pretty much non-existent for the past few seasons, but this year that seems to have changed. Since spending a 2nd round pick on Alabama running back Eddie Lacy in the 2013 NFL Draft, the Packers are positioning themselves into a more balanced attack. Lacy suffered a concussion in week 2 against Washington, but since coming back has been nothing short of fantastic. Against Detroit in week 4, Lacy went for 99 yards, but more importantly, Green Bay was able to manage the clock better than they ever have before. Last week against Baltimore, Lacy did himself 1 better, notching his first 100 yard game of his NFL career. Going for 120 yards, Lacy helped vault the Packers running game into the top 5 of the NFL for yards per game average. But, those 120 yards were coming off of a bye week, can Lacy keep it up consistently?

Cleveland’s running game on the other hand is moving towards a platoon between Willis McGahee and Chris Ogbonnaya. Both McGahee and Ogbonnaya played poorly against Detroit, managing only 61 yards between the two of them. If not for Travis Benjamin’s 45 yard end-around play, Cleveland backs would have been held for well under 100 yards. With Brandon Weeden under center, Cleveland should really try and establish the run early in the game.

Green Bay lost 2 major contributors of their receiving corps last week against Baltimore. James Jones and Randall Cobb both went down with pretty ugly lower body injuries. Cobb is going to be out 4-8 weeks with a fractured fibula, while Jones is listed as questionable with a sprained PCL (the ligament you want to injure in your knee). Jordy Nelson meanwhile has been lighting up the stat sheet. Against Baltimore it was Nelson’s vertical route over the middle for 64 yards into the end zone that led Green Bay to victory. It was Green Bay’s only touchdown of the game.

GRADE: B+ (depending on the health of Jones. Without Jones: C+)

Cleveland’s Josh Gordon has quickly emerged as a rising star in the National Football League. Gordon alone is a huge target in the middle of the field for Brandon Weeden, but can Weeden get him the football? That always seems to be the biggest issue for talented teams, finding someone to deliver the ball to the talent in space. Look at the Arizona Cardinals as a prime example. Larry Fitzgerald is widely regarded as one of the most talented wide-outs in the game. Unfortunately, nobody can get him the ball since Kurt Warner retired. Same problem in Cleveland. With Brian Hoyer, things started to be on the upswing. Not so much with Weeden under center.

Green Bay’s Jermichael Finley suffered a horrific concussion against the Cincinnati Bengals in week 3, which saw him literally stumble off the field. Finley has not missed a game, but also has not been at 100% production…even with a bye week to get him healthy. Finley saw 7 targets against the Baltimore Ravens just last week, but he converted that to only 3 receptions. Look for Finley to be slowed down significantly against a tough Browns Defense.

Cleveland’s Jordan Cameron has been slowed down significantly from the start of the season. Since Brian Hoyer went down mid-way through the 1st quarter against the Buffalo Bills 2 weeks ago, Cameron has been held in check by Buffalo and Detroit. Against those teams, Cameron saw a combined 10 targets which he converted for 8 receptions. Compare that to the 2 weeks prior, against Cincinnati and Minnesota, where Cameron saw 12 and 11 targets respectively. Defenses have clearly figured out how to slow Cameron down, but Weeden must figure out how to get it to his big bodied tight end in space to have a shot against Green Bay.

Green Bay has a tremendous gap in the middle of their defense. Clay Matthews is still recovering from his broken thumb, which is set to keep him out at least 2 more weeks. Cleveland, though, must figure out how to exploit the weaknesses in Green Bay’s defense. Offensive Coordinator Norv Turner will have his work cut out for him with Brandon Weeden under center. The Browns obviously have some major weapons to work with, but can Weeden make the right decisions under what will likely be moderate to consistent pressure brought by the Green Bay defense? The game rests in Weeden’s hands.

EDGE: To close to call

Despite ALL of the injuries to the Green Bay offense, there is still a world class quarterback under center for Green Bay. Any time Aaron Rogers takes the field, Green Bay has a chance to win. Expect the Browns Defensive Coordinator Ray Horton to test Rogers with the usual package of blitzes and mix ups of personnel. The Browns will also try and take advantage of a rookie running back, Eddie Lacy. With Rogers in control though, this battle is Green Bay’s to lose.

Cleveland returner Travis Benjamin is a threat to break off a punt or kick return for a touchdown everytime he’s given the opportunity. Benjamin’s breakaway speed proved to be to much for Buffalo in week 4, will Green Bay be able to stop him? Mason Crosby despite some shaky moments himself, kicked Green Bay to victory over Baltimore with 4 field goals…including a long of 50 yards. Crosby will be back home at Lambeau, but still produces some indigestion whenever he lines up outside of 50 yards away from the goal post.

Green Bay head coach Mike McCarthy understands what it’s like to coach in big games, he won a Super Bowl just a few years back. It’s also Browns head coach Rob Chudzinski’s first time at the “Frozen Tundra” as the true leader of a football team. Green Bay has suffered numerous injuries on both sides of the ball, but you know they will be ready to play despite barely having 46 guys to dress. Green Bay is also at home, so you have to give them the edge. Against mutual opponents (Lions, Ravens, Bengals) Green Bay is 2-1 (losing to Cincinnati) while Cleveland is 1-2 (beating Cincinnati).

Aaron Rogers goes for 3 touchdowns, including one to 2nd year wide receiver Jarret Boykin (playing in place of Randall Cobb). While, Brandon Weeden throws 3 interceptions…one of which comes in the red zone on a promising drive.