Browns TE Jordan Cameron's Status In Limbo After Another Concussion 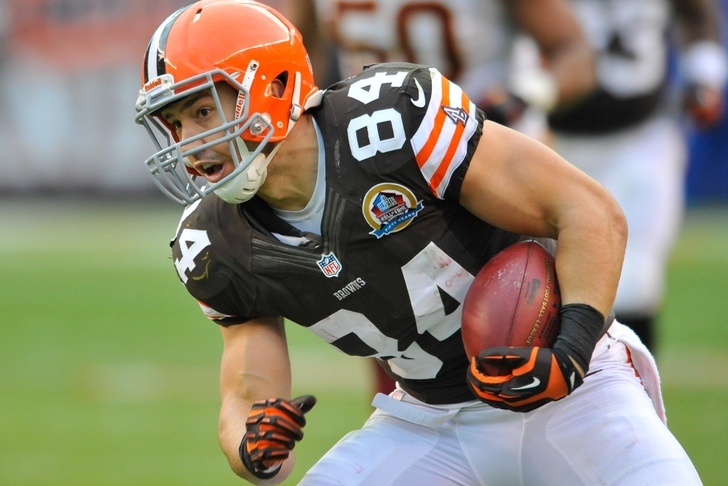 After suffering his third concussion in two years during the Cleveland Browns' 23-13 victory over the Oakland Raiders on Sunday, tight end Jordan Cameron's status for the next two games is officially in limbo.

Per Mary Kay Cabot of the Northeast Ohio Media Group, "with the Browns playing two games over the next 11 days -- at home Sunday against Tampa Bay and Thursday Nov. 6 in Cincinnati -- it remains to be seen if Cameron will play in either one."

Cameron was drilled in the head and neck area by Oakland Raiders safety Brandian Ross on a 21-yard catch. Ross blatantly led with his helmet in an illegal manner, costing Cameron the rest of the game and possibly more considering the Cleveland Browns' upcoming schedule.

"The league, as they should be, is very deliberate with the (concussion) protocol,'' coach Mike Pettine said, via Cabot's article on Monday. "You just take each day and see where he is symptom-wise. I haven't gotten the full medical report yet today. I'll probably know a little bit more later this afternoon."

Sunday's injury at FirstEnergy Stadium marks Cameron's third concussion since December of 2012. He has suffered one each of the past three seasons.

"As a quarterback you always feel bad, especially on a play like that,'' QB Brian Hoyer said. "I know it was an illegal hit. He made a great play and to lose him for the game hurts. It's something we've dealt with all year long, next man up and our guys did a good job whether it was Jim Dray making a big play to get us to the goal line or whatever it is."