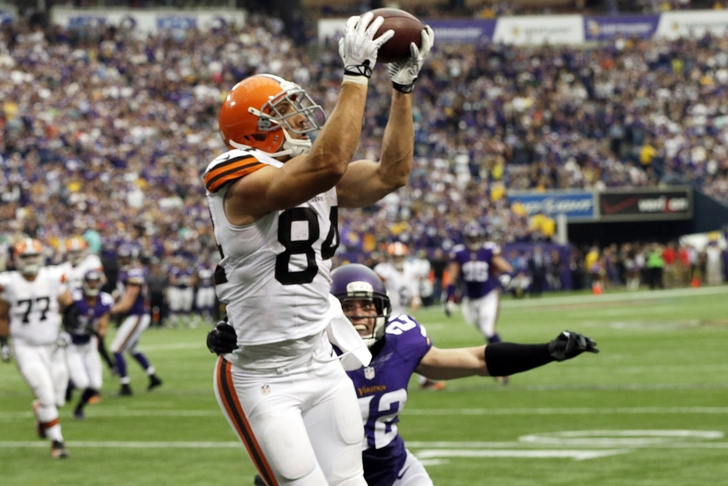 Can't get enough Browns rumors and news? Be sure to download our 5-star iPhone app today!

The Cleveland Browns have had an inconsistent yet exhilarating start to the 2014 NFL season. The offense has seemingly turned a corner in most respects, but rumblings regarding the acquisition a top wideout continue in advance of the October 28th trade deadline.

Are the Browns actively looking? Is there a "wild card" option looming? Keep reading as we bring you the latest from inside the Dawg Pound.

According to Ian Rapoport of the NFL Network, one of the names that was mentioned in connection with Percy Harvin during recent trade talks was Browns tight end Jordan Cameron:

Seattle's still in the market for a tight end, so don't be surprised if they inquire about Cameron again. However, it doesn't look as if the Browns will be biting on such a deal at this juncture.

The Arizona Cardinals are currently in a bit of a financial bind with stalwart wide receiver Larry Fitgerald. After signing a seven-year contract extension in 2011, deferred money on his deal will begin to zap their salary cap flexibility starting next season.

Fitzgerald will cost around $23 million in cap space in 2015 before falling back into the $17 million range in 2016 and 2017. The Cardinals would likely have to offload some of their current skill position depth to keep Fitzgerald at that number, making a trade (under the right circumstances) a possible solution.

Several NFL sources indicate that the Browns could be a wild card in such negotiations, especially with the uncertainty surrounding Josh Gordon. However, tying up so much money while attempting to build towards the future could be enough for GM Ray Farmer to take a pass.

After Sunday's 24-6 loss to the previously-winless Jacksonville Jaguars, speculation once again cropped up regarding the quarterback dynamic in Cleveland.

However, per CBS Sports, Mike Pettine once again came out and "firmly" stood behind Brian Hoyer as the team's starting QB. Such an affirmation is likely to be fluid if things go south for Hoyer in late October and November. However, as of now, there is no on-the-field controversy when it comes to the question of Hoyer or Manziel.

Follow our Cleveland Browns team page for the latest in Browns rumors!