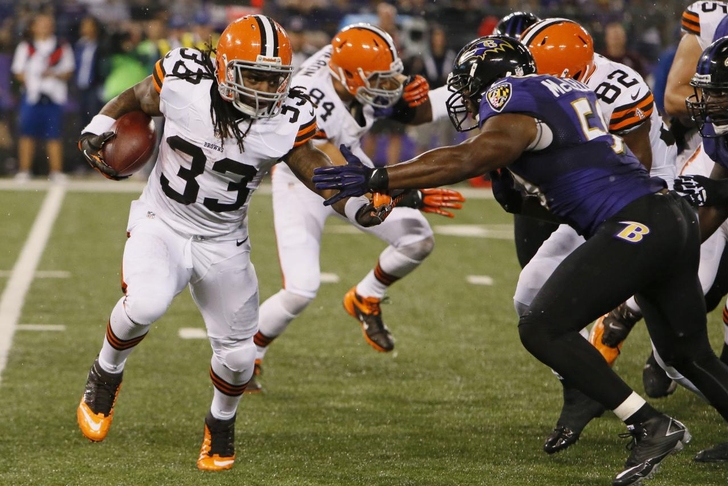 After two, the Ravens lead the Browns 10-7. Here's what we saw in the first half:

Brian Hoyer Getting It Done

Brian Hoyer continues to play smart football, and with each game, it seems less and less likely that we'll see Johnny Manziel starting this year. Hoyer is moving the ball, executing well and avoiding mistakes, and he's given coaches no reason to consider pulling him in favor of the former Heisman winner.

Manziel didn't get any time under center...but he did catch a pass(!), racing down the sideline for a sizeable gain that was called back on a penalty. We'll be interested to see if Mike Pettine finds more creative ways to get Manziel some playing time.

Six flags have cost the Browns a combined 45 yards, and the timing has prevented Cleveland from effectively building momentum and extending drives. If they want to win this game, they'll have to improve their discipline in the second half.

The Ravens have almost entirely shut down Cleveland's running game, holding the Browns to just 21 rushing yards on 10 carries.

Both Hoyer and Joe Flacco have been solid so far in this one, and the two QBs are a combined 21/26.

In the absence of Ray Rice, Baltimore RB Lorenzo Taliaferro has quietly stepped up. Taliaferro has 81 rushing yards on 11 carries so far, good for a 7.4 yards per carry average.